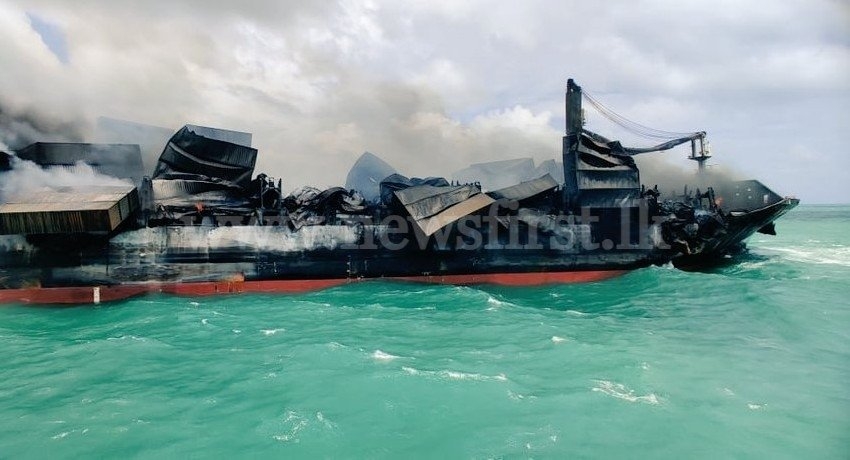 COLOMBO (News 1st); The fire on board the MV X-Press Pearl continue to burn in the stern area of the vessel, said General (Retd) R. M. Daya Ratnayake, the Chairman of the Sri Lanka Ports Authority adding that a sound of an explosion was heard from the vessel early on Saturday (29) morning.

Firefighting efforts of the Sri Lanka Ports Authority and other local agencies in coordination with Indian Coast Guard Ships to extinguish the fire on the X-Press Pearl continues for the ninght day today. The fire has been contained considerably. Local authorities along with the assistance of the firefighters and salvos are engaging in assessing the impact of the incident and mitigate the possible environmental damage.

On May 20, 2021, the Singapore-flagged Containership, ‘X-Press Pearl’ reported smoke from the cargo hold while at Colombo anchorage.

Subsequently, the ship’s crew members were safely evacuated and relocated by following the health guidelines promulgated by the health authorities in Sri Lanka to control the spread of Covid-19.

Firefighting tugs have constantly been spraying and misting the stricken vessel with support from the Sri Lankan Navy and Indian coastguard, who remain on scene.

The ship remains at anchor off Colombo port.

On May 20, 2021, the Singapore-flagged Containership, ‘X-Press Pearl’ reported smoke from the cargo hold while at Colombo anchorage, Sri Lanka.

Emergency procedures were initiated, and CO2 released in the cargo hold. Port control and the local authority were informed, and Sri Lankan navy assets along with firefighting teams were placed on standby.

On May 21, the vessel reported fire on deck.  Firefighting tugs were deployed by the port authority and a helicopter providing support to help fight the fire. The ship’s crew assisted with boundary cooling of the area.

The Harbour Master and Sri Lankan Navy were on standby to assist in case of evacuation.

Fire and chemical experts were contacted by the vessels operators, and Smit Salvage were appointed as Salvors.

A further and louder explosion was heard on May 25, and as a prudent measure, it was decided to evacuate all 13 crew and the firefighting team of 12. The crew and firefighting team were transferred to a quarantine facility ashore. Unfortunately, two crew members suffered leg injuries during evacuation and were taken to hospital for attention. All were reported to be in stable condition.