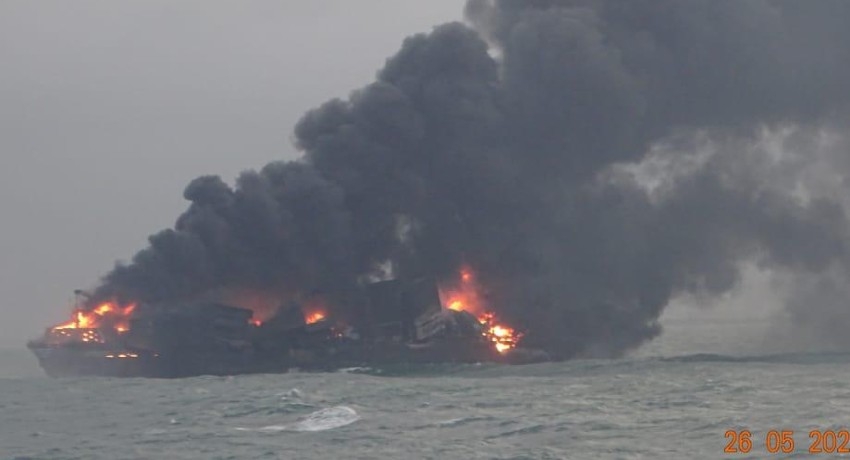 Fire on X-Press Pearl vessel yet to be brought completely

Fire on X-Press Pearl vessel yet to be brought completely

COLOMBO (News1st): A broad discourse has arisen on the X-Press Pearl Ship that caught fire in Sri Lankan waters recently.

What is the current situation of the vessel?

It has been 9 days since the vessel reached the Outer Harbour of the Colombo Port. The fire has not been doused completely yet.

425 kilograms of dry chemical powder was air-dropped onto the burning vessel using a Bell 212 helicopter of the Sri Lanka Air Force.

Were there insufficient resources to bring the fire under control?

“The Salvage companies have tug boats that can be used especially for firefighting operations. We don’t have such tugboats,” Captain Nirmal Silva, the Harbour Master said.

Were appropriate measures taken to douse the fire?

It was reported that a fire had erupted on the X-Press Pearl Vessel, a few hours after the vessel had entered the Colombo Port.

Efforts undertaken by the Sri Lanka Ports Authority to douse the fire using water had proven to be futile.

Professor Pradeep Jayaweera, attached to the Department of Chemistry at the University of Sri Jayawardenapura, says that the usage of water is not the appropriate method of dousing the fire.

Andrew Leahy, the Director of MTI Network, which represents the operators of the vessel, told News1st that an investigation will be carried out into the incident after the fire is extinguished.