Sri Lanka Legends reached the final of the Road Safety World Series 2020/21 after claiming a one-sided 8-wicket victory against South Africa Legends during the second semi-final on Friday (19).

On Sunday (21st March), India Legends and Sri Lanka Legends will face each other in the final of this tournament.

Right-arm pacer Nuwan Kulasekara brought the early breakthrough by dismissing the opener Andrew Puttick for a duck. Then  opener Morne van Wyk and Alviro Petersen set up the 47 runs partnership for the second wicket.

But, once that partnership was broken, South Africa Legends faced a huge batting collapse. Petersen scored run-a-ball 27 runs (5 fours) as Farveez Maharoof took his wicket. Later, the opener Morne scored a fifty (53 off 47 balls with the help of 8 fours) before Sanath Jayasuriya successfully trapped him for lbw.

But Nuwan Kulasekara actually dominated with the ball in hand as he took four more wickets apart from the opener Puttick. His other successes were dismissing Roger Telemachus (5), Makhaya Ntini (0), Justin Kemp (15) and Monde Zondeki (0). Apart from the opener Morne van Wyk and no.3 batsman Alviro Petersen, only Kemp scored double-digit scores in that innings.

Nuwan Kulasekara had bowling figures of 4-0-25-5 as it was the first five-wicket haul in this tournament history. Also, Maharoof (1/18), Kaushalya Weeraratne (1/12) and Jayasuriya (1/12) got one wicket each in this match. 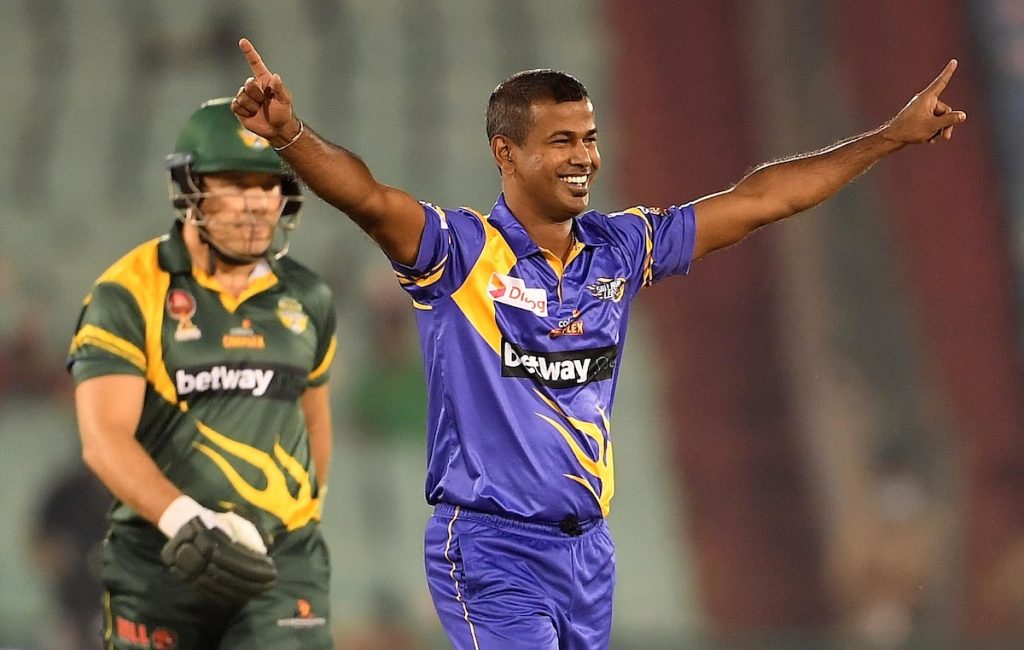 Both the Sri Lanka Legends openers, captain Tillakaratne Dilshan and Sanath Jayasuriya scored 18 runs each in the chase as Makhaya Ntini and Alviro Petersen respectively got those wickets. But the next batsmen Upul Tharanga and Chinthaka Jayasinghe totally controlled the chase with their solid batting performances as Sri Lanka Legends comfortably chased down the target.

Upul Tharanga and Chinthaka Jayasinghe had 70 runs partnership for the unbroken third wicket. While Tharanga scored 39 not out off 44 balls (5 fours), aggressive Jayasinghe scored 47 not out off 25 balls with the help of 8 fours and only six.