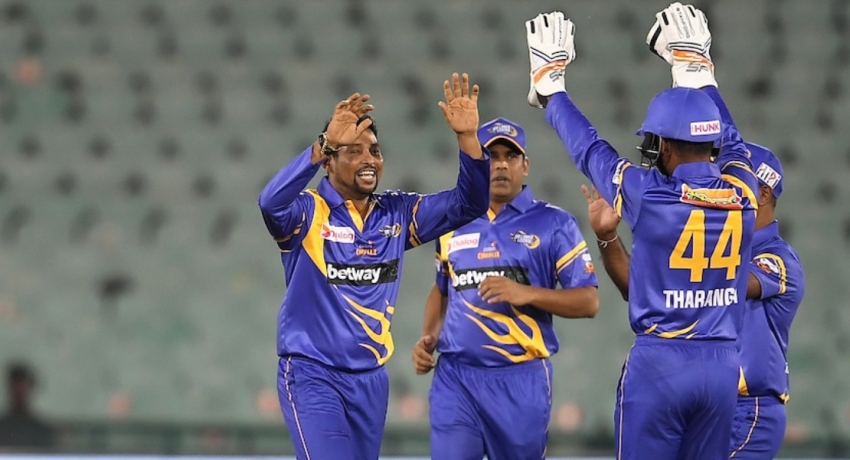 All-round Tillakaratne Dilshan secured a memorable 6-wicket victory for Sri Lanka Legends on Sunday (14) night as they thrashed England Legends in their last league stage match of the Road Safety World Series 2020/21. With this big victory, Sri Lanka Legends have secured the top spot on the tournament points table.

Sri Lanka Legends captain Tillakaratne Dilshan provided the furious start for his team by taking the wickets of openers Phil Mustard (0) and skipper Kevin Pietersen (1) and the next batsman Usman Afzaal (1) as England Legends were struggling on 3/3 in 2.5 overs.

In the seventh over, England Legends were in more trouble with 8/4 as Kaushalya Weeraratne took the wicket of Darren Maddy (2). In the 10th over, Dilshan took another wicket of Owais Shah (6) as three out of his four victims were bowled while Phil Mustard lost his wicket through lbw. Dilshan finished that innings with incredible bowling figures of 4-1-6-4, which is also the best bowling figures in this tournament history.

Though Monty Panesar was taking wickets in the other end as he dismissed Kaushalya Weeraratne (1), Upul Tharanga (6), Chamara Silva (8) and Chinthaka Jayasinghe (0), Dilshan was totally unstoppable. Panesar had bowling figures of 4-0-264

Dilshan scored 61 not out off just 26 balls with the help of 11 fours and only six as Sri Lanka Legends won that match by six wickets with 75 balls remaining.