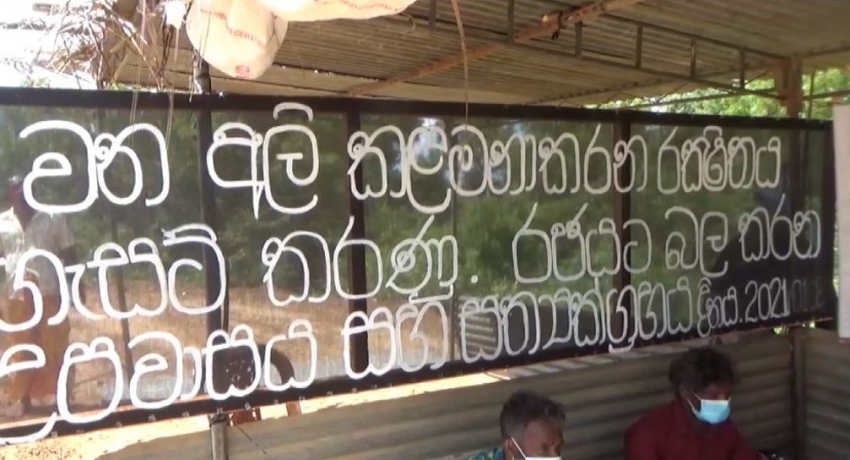 Colombo (News 1st); For the 15th consecutive day, farmers in Walsapugala are staging a Sathyagraha campaign demanding the Proposed Wild Elephant Management Reserve in Hambantota, be included in the government gazette.

On the 18th of January locals from Walsapugala, Hambantota decided to take to the streets demanding the Proposed Wild Elephant Management Reserve in Hambantota, be included in the government gazette.

The Walsapugala village in Hambantota is a village in the frontlines of the Human-Elephant conflict, and for many years the people in this village have been living in fear for their lives.

The Proposed Wild Elephant Management Reserve in Hambantota will be included in the government gazette in the near future, said Minister Namal Rajapaksa on 19th January 2021.

If the Proposed Wild Elephant Management Reserve in Hambantota does not go ahead, it would be a great injustice to the farming community said Namal Rajapaksa at the time, adding it could also pose a threat to the wild elephants as well.

On 21st January, Irrigation Minister Chamal Rajapaksa said a new plan has been formulated to set-up a new managed elephant reserve in Sooriyawewa.

On the same day, the manager of the Mayurapura division of the Mahaweli Authority requested farmers to end the fast by promising that the problem would be resolved through a gazette notification within a month.

However, the protesters refused to accept the undertaking and insisted that the protest would be called off once the problem is resolved.

Government and Opposition politicians time to time have visited the farmers and requested them to call of their campaign, however as a proper solution was not given, all talks failed.

Minister calls for probe on Disposal of furnace oil from vessels