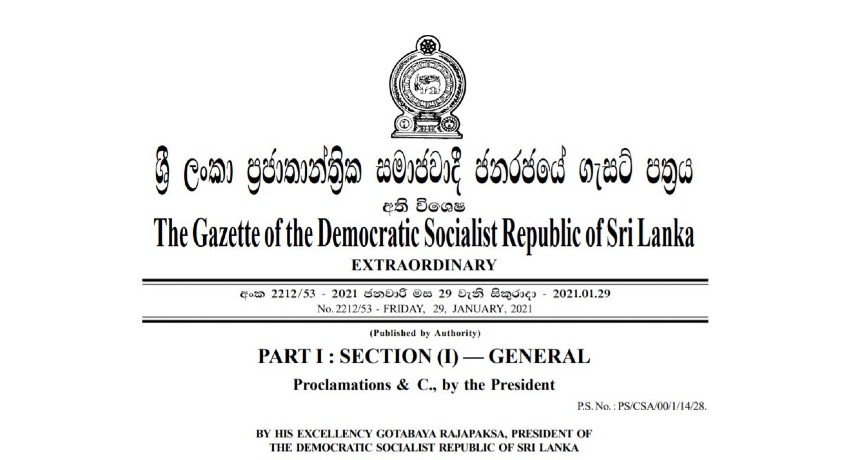 According to the Extraordinary Gazette the members of the Special Presidential Commision of Inquiry are;

The Gazette notes, the final reports of the Presidential Commission of Inquiry appointed to probe incidents of political victimization states, that by establishment of the Commission to Investigate Allegations of Bribery or Corruption, Financial Investigations Divisions of the Sri Lanka Police of the Special Investigations Unit of the Sri Lanka Police was established contrary to the provisions of the Code of Criminal Procedure.

These were established by a set of people of a political organization under the name of Anti – corruption Committee and a National Executive Council, which was establish against the Constitution of the Democratic Socialist Republic of Sri Lanka and contrary to the provisions of the same, with the intention of directly or indirectly retaliate the Complainants who are mentioned in item number 09 and 10 of the above said investigation report.

The Special Presidential Commission of Inquiry is tasked to act upon the below mentioned matters,

Including the above mentioned facts in the report, if respondents mentioned in the item No. 08 of the above report
was,
I. Violating the provisions of the Constitution of Democratic Socialist Republic of Sri Lanka, while destructing the oath which had been given in accordance with the provision of the said Constitution
II. Abuse or misuse of power, interference, fraud, corruption, criminal misuse, criminal breach of trust or nepotism
III. Political retaliation against some one
IV. When,
(a) Making any appointment or transfer,
(b) Granting a promotion,
(c) Terminating the service, of some one due to any type of disorder
(d) Violating of any written law

The said Commissioners are authorized and empowered to conduct or cause the conduct of necessary investigations and inquiries and are required to transmit to the President the Final Report or Interim Reports within three months of the date of appointment, setting out the findings of investigations and inquiries, and recommendations, conclusions and imposed punishments relating thereto.