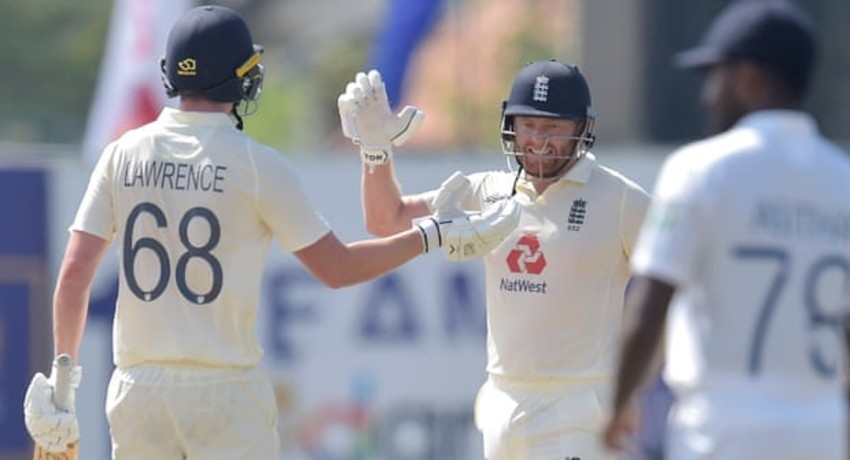 Galle; Jonny Bairstow and Dan Lawrence’s unbroken fifty partnership steered England to a seven-wicket victory over Sri Lanka in the first Test in Galle as they knocked off the 36 runs required inside 10 overs on day five.

Bairstow (35no) and debutant Lawrence (21no) lifted England from their overnight 38-3 to their victory target of 74 – although Lawrence would have fallen lbw to spinner Dilruwan Perera on nine had Sri Lanka reviewed.

But Bairstow and Lawrence steadied the visitors with a stand of 24 up until stumps and extended that partnership to 62 on Monday as their side took a 1-0 lead in the two-match series and completed a fourth straight away Test victory, having won three on the trot in South Africa last winter.

Lawrence – who scored 73 in the first innings – was subjected to an lbw review in the opening over but UltraEdge showed he gloved the ball as he reverse swept Dilruwan while the impact was probably outside the line, too.

Sri Lanka should then have reviewed two overs later, with Dilruwan’s sharply-turning delivery set to go on and hit Lawrence’s stumps after beating the Essex batsman on his inside edge.

Root’s side only need to avoid defeat in Friday’s second Test, also in Galle, to secure a second straight Test series success in Sri Lanka, having swept the hosts 3-0 on the island in late 2018 for Root’s first series win as captain away from home.

Root’s 228, his fourth Test double hundred, was key in England’s victory in Galle this week, with that innings underpinning his side’s total of 421 as they carved out a 286-run lead after first innings.

England had been in command ever since Sri Lanka subsided to 135 all out after winning the toss, with a series of rash shots seeing the home side skittled in 46.1 overs and Dom Bess snare 5-30.

Bess’ fellow spinner Jack Leach picked up 5-122 in Sri Lanka’s second innings but the hosts showed far greater application in that knock, with Lahiru Thirimanne making 111 in a total of 359.

Sri Lanka, though, were ultimately left to rue their first-innings implosion, in which stand-in skipper Dinesh Chandimal top-scored with 28, as a better batting display could have left England with a really difficult chase.

Root’s side made hard work of their double-digit target on day four, with Lasith Embuldeniya castling Sibley and having Crawley caught by Kusal Mendis, before Niroshan Dickwella’s direct hit accounted for Root after the England captain’s mix-up with Bairstow and collision with Dilruwan.