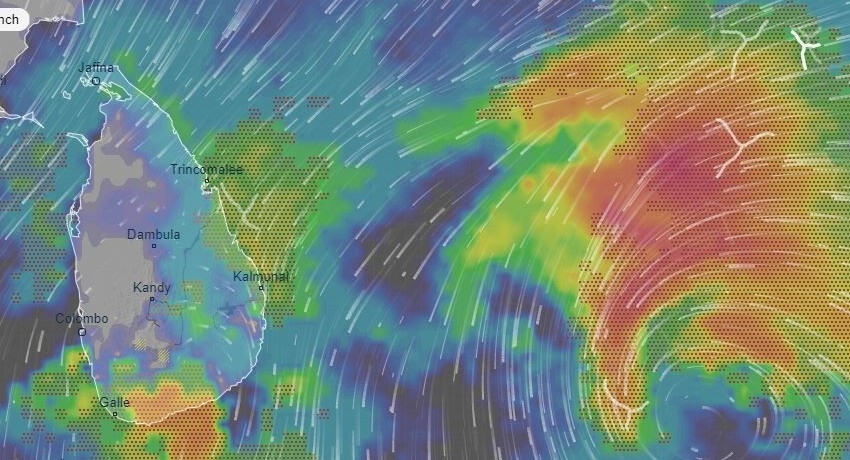 Colombo (News 1st); The low-pressure area in the south-east Bay of Bengal has concentrated into a depression lay centered 750 km southeast to Trincomalee.

This system is very likely to move west-northwestwards and cross the eastern coast of Sri Lanka between Batticaloa and Mullativ around Wednesday (02) evening.

For Sea Area – Under the influence of the aforementioned system, from 01st December to 03rd December;
 Intermittent showers or thundershowers and sudden roughness, associated with a sudden increase of wind speed up to (80-100) kmph are expected over Eastern and Northern deep and shallow sea areas.

 The shore off the coast extending from Kankesanthurai to Pottuvil via Trincomalee and Batticaloa may experience surges due to the effect of swell waves, having (2.0- 3.0) m height.

From 02nd December to 03rd December;
 The sea area around the island will be very rough to high as the wind speed can be increased up to (80-100) kmph at times.

 The shore off the coast extending from Batticaloa to Mullativ may experience surges due to the effect of swell waves, having (2.0-3.0) m height.

For the Land area –
 The general public is requested to be vigilant regarding impending extreme weather situations.
 For emergency assistance contact the local disaster management authorities.
 Requested to be attentive about future advisories issued by the Department of Meteorology in this regard.