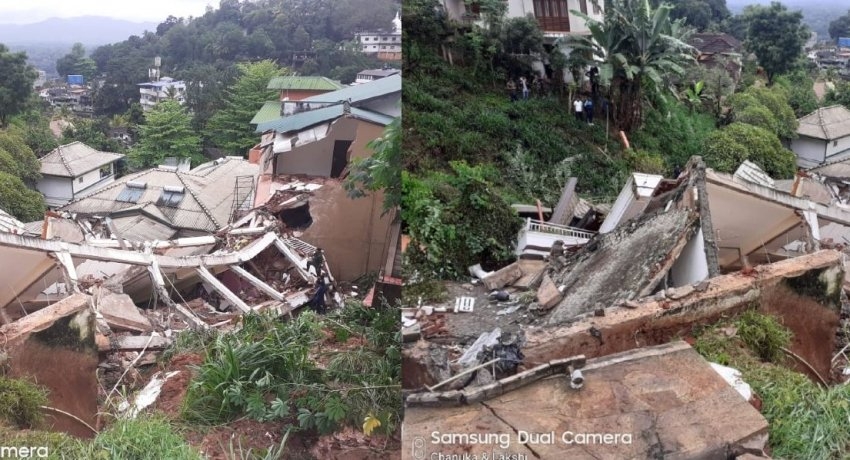 Colombo (News 1st); The National Building Research Organization said the construction of a building on top of a loose or soft soil layer was cause for Sunday’s (20) tragedy in Buwelikda, Kandy.

NBRO officer Samantha Bogahapitiya after investigating the incident said the soil layer was unable to bear the weight of the five-storied building, which eventually resulted in the collapse during the early hours of Sunday.

The National Building Research Organisation said the five-storied building, which caved-in and collapsed in Buwelikada, Kandy yesterday was built blocking a valley path.

Chairman of the Geological and Mines Bureau, Anura Walpola said the cause of the collapse was not due to a tremor.

Senior Professor Athula Senaratne from the University of Peradeniya said the tragedy could have been averted if the foundation was based on the solid layer of rock below the surface.

He believes the building was constructed in a manner in which the earth’s surface cannot bear the weight of the building.

However, Anura Lewke, the owner of the building which collapsed claimed the State Engineering Corporation approved the construction which was done by a reputed company.

He went on to note, the incident took place a few hours after the entire family had gone to sleep adding when they heard loud noises they decided to leave the premises and did not have time to alert the neighbors.

Sri Lanka Police said the occupants of the building vacated the premises following early signs of collapse and had not taken any step to alert the police or their neighbors.

Police said if they were alerted the tragedy could have been averted.

Three people including a two-month-old infant died after a building located down Sanghamitta Mawatha in Buwelikada, Kandy caved-in and collapsed around 5:00 yesterday morning.

The victims are Chamila Prasad, his wife Achala Ekanayake, and their child.

Sri Lanka Army and Police managed to rescue three others who were buried under the debris following the collapse.