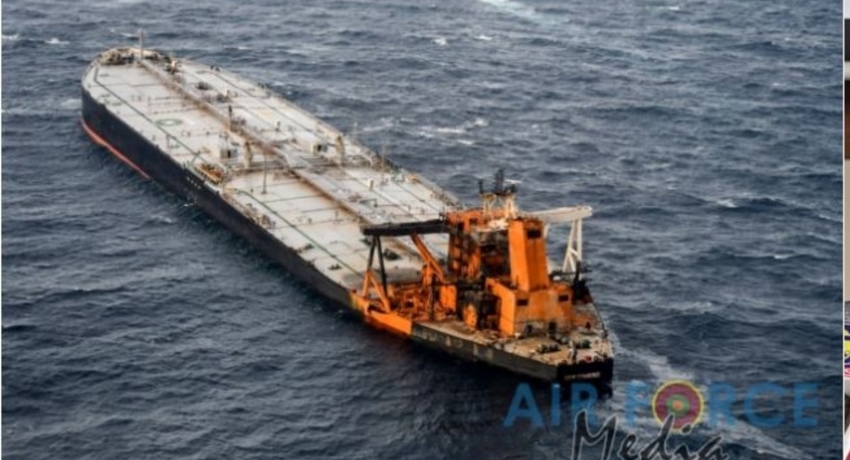 Colombo (News 1st);  In the latest development, another oil patch was observed on Wednesday (09) morning, said Captain Indika De Silva, the Sri Lanka Navy Spokesperson adding the oil was identified as that from the ship’s fuel tank – Heavy Fuel Oil.

Further, a narrow diesel oil patch extending to one kilometer away from the ship was observed on Tuesday (08) evening.

In such circumstances, a Dornier aircraft of the Indian Coast Guard was flown to the site to airdrop diesel dispersant to minimize the potential impact on the marine environment, said the Sri Lanka Navy.

The Sri Lanka Navy said legally obtained samples were sent to laboratories ashore for testing and testing is also carried out aboard a Pollution Control Ship of the Indian Navy.

Captain Indika De Silva said preliminary observations prove the oil was from a leak of the fuel tank and not from the Crude Oil Storage of the MT New Diamond as the oil patch is Heavy Fuel Oil used by commercial ships.

The Sri Lanka Navy confirmed there is no leak from the Crude Oil Storage of the MT New Diamond adding a joint diving operation by the Sri Lanka Navy and the Indian Coast Guard will be launched soon.

Disaster management teams successfully brought the fire, which reignited aboard MT New Diamond as a result of adverse weather, under control during the early hours today, confirmed the Sri Lanka Navy.

Three salvage experts from SMIT Singapore Pte Ltd, an international Singapore-based company, who were appointed by the commercial owner of New Diamond, as its salvage expert had boarded the distressed MT New Diamond for the first time on Wednesday (09) and conducted an onboard assessment.

Speaking to reporters, Sri Lanka Navy Spokesperson Captain Indika De Silva said specially trained Firefighting and Disaster Management teams from the Sri Lanka Navy and the Indian Coast Guard will also board the distressed Crude Oil Tanker to make their own assessments of the vessel regarding its security and damages.

SMIT Singapore Pte Ltd had sent 17 experts to Sri Lanka who were transferred by the Sri Lanka Navy to the site of the distressed Super Tanker.

Captain Indika De Silva, the Sri Lanka Navy Spokesperson said the fire-stricken ship is now lying between 40 to 41 nautical miles off Sangamankanda Point and it is being held in position by a tug.

“For the past 06 days at least 04 tugs and 10 ships were pumping water into the distressed MT New Diamond aimed at the engine room where the fire was reported from and therefore the engine room and the pump room are inundated by water,” said the Sri Lanka Navy Spokesperson adding the weight of the water inside had forced stern of the ship to go under than the standard level.

Therefore, a tug is being used to pull the bow of the distressed Super Tanker to ensure there is no instability, said the Sri Lanka Naby Spokesperson adding the hull remains intact and there is no threat of the MT New Diamond sinking.

The cost incurred by the Sri Lankan Government and other stakeholders are being calculated, said the Sri Lanka Navy and after the situation is completely controlled, if the Sri Lanka Government decides not to bring the ship to the country’s shores, owners of the MT New Diamond and the salvage expert will be held responsible to move it out of Sri Lankan waters. 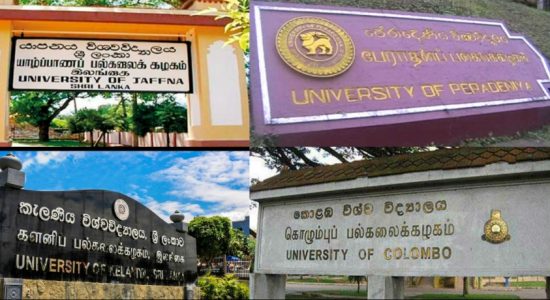