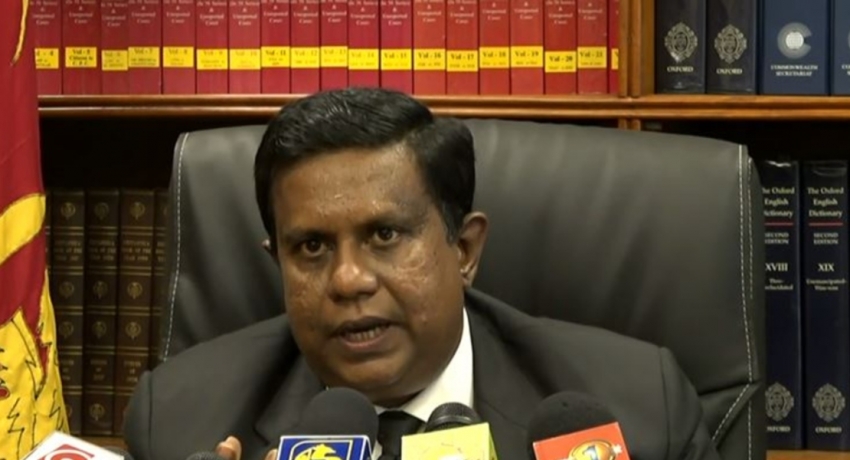 It’s been 12 days since the Negombo Magistrate’s Court issued a warrant for the arrest of Interdicted Negombo Prison Superintendent Anurudhdha Sampayo, and Sri Lanka Police is yet to locate and handcuff the suspect, said Deputy Solicitor General Dileepa Peiris on Friday (31).

Speaking at the very first press conference organized by the Attorney General’s Department of Sri Lanka in its 136-year history, Deputy Solicitor General Dileepa Peiris said, the present system is what gives courage to criminals and wanted suspects like Sampayo to show blatant disregard to the judicial system and stressed this needs to be stopped and that is why he wanted the Acting Inspector General of Police to explain his position on enforcing the warrants against the suspect.

Highlighting the fact this case would eventually become the most important legal matter taken up in Sri Lankan judicial history, Deputy Solicitor General Peiris stressed it is of paramount importance for the Acting Inspector General of Police to appear in court and show interest in the matter and explain as to why Sri Lanka Police failed to enforce the warrants and why it cannot locate and arrest Prison Superintendent Anurudhdha Sampayo.

HOW DID IT ALL BEGIN?

The Criminal Investigations Department launched an investigation into the corrupt activity carried out by incarcerated criminals held at the Negombo Prison with the assistance of officers attached to the Negombo Prison, as well to generating illegal revenue and engaging in drug trafficking.

The Department of Prisons which also supported the investigation in a surprise raid on the 13th of February 2020 discovered 66 grams of heroin, 11 grams of cannabis, 414 cigarettes, 400 grams of tobacco, Rs. 700/- in cash, a USB device, 08 mobile phones, 17 SIMs, 12 hands-free devices, 08 Chargers and 02 card-readers from the L Ward at the Negombo Prison.

However, the most important discovery made during that raid was the Digital Electric Scale.

Three months later, on the 11th of May 2020 the Department of Prisons raided three particular cells at the Negombo Prison and to their astonishment, the officers discovered a latest two-door refrigerator, luxury beds and bedding, an electric gas oven, an electric kettle, a large-sized ice box filled with various food items, body-building enhancement products, a large national flag, expensive sauces & jams as well as enhancement products.

He went on to note, the Attorney General thereafter decided to deploy officers to study the investigative material and they discovered the Superintendent of the Negombo Prison, the Head Jailor, a 01st Tier Jailor and a 02nd Tier Jailor were involved in these misdeeds and there was sufficient evidence to file charges against them.

DSG Peiris stressed this is just the tip of the iceberg, adding a large-scale investigation is to be launched on these events.

One of the charges filed against the 04 suspects is fabricating false evidence to prepare forged documents.

Attorney General Dappual De Livera on the 22nd of July instructed the Director of the Criminal Investigations Department to obtain a warrant and arrest the said officers, and thereafter the Negombo Magistrate’s Court issued the warrants for the arrest of the suspects, on the very day and the Magistrate had stressed to enforce the warrants immediately.

The warrants were to be served and completed on the 29th of July said DSG Peiris adding on the 27th of July, the 04th suspect in the case Second-tier Jailor Kalinga Kaluaggala had surrendered to the Criminal Investigations Department.

On the 29th of July, when the Attorney General’s Department went back to the Negombo Magistrate’s Court, they found two other men in the dock with the 04th suspect in the case, said DSG Peiris, adding moments after the matter was called up, an Attorney-at-Law stepped forward and claimed the two men were Head Jailor Sarath Bandara and First-tier Jailor Sarath Nishantha, the second and third suspects in the case.

However, the Attorney General’s Department had raised its concerns as to why the warrants were not enforced by law enforcement in the same manner where law enforcement scrambles to locate COVID-19 cases and their contacts.

“We raised a question as to what was Sri Lanka Police doing for 07 days until these two suspects appeared in court and walked into the dock with their hands in their pockets and whistling a tune,” said DSG Peiris adding such a statement was not aimed any individual or institutions.

“The key-witness in this case is inside the prison and if Sri Lanka Police failed to arrest the suspects within 07 days, what is the message we are sending to the informant and future witnesses,” questioned the Deputy Solicitor General.

“If the 87,000 strong police force cannot mobilize to locate and arrest an ordinary suspect, what is the message we are sending to the general public as a whole,” further questioned the Deputy Solicitor General.

The Deputy Solicitor General stressed, the top ranks of Sri Lanka Police must show leadership in such instance in order to encourage detectives and investigating officers to pursue leads and serve justice.

He called on the DIGs in Sri Lanka Police to show leadership when it comes to such important cases, adding as a Deputy Solicitor General he represents the Attorney General at the lower courts in the Sri Lankan Judicial System, which is the Magistrate’s Court.

Further the DSG emphasized, Sri Lanka Police must locate where these suspects were in hiding until they decided to surrender to the CID and the Negombo Magistrate’s Court.

He said the criminals have made the Negombo Prison their playground and are engaged in various criminal activity from within prison walls, with the assistance of several prison officers.

Two days after the warrants were issued, Anurudhdha Sampayo filed a petition with the Court of Appeal and DSG Peiris questioned what was Sri Lanka Police doing all that time.

“Where is Anurudhdha Sampayo? Has he vanished into thin air?, “questioned yet against Deputy Solicitor General Peiris.

He said individuals of such nature either resort to obtain injunction orders from upper-courts or flee the country, to evade capture.

He said the case filed against the Prison Officers as well as the Police Narcotic Bureau are network offences involving criminals and officers alike, and law enforcement must act to put an end to it.

The Attorney General’s Department said it is determined to expedite the criminal cases filed in Sri Lanka adding, every case is being postponed as a tradition in the country and stressed, if not for extensive media coverage on the drug trafficking incident carried out by some officers of the police narcotic bureau, that case too would have been swept under the carpet.

The case will be called up on the 05th of August, and Deputy Solicitor General Dileepa Peiris said either Anurudhdha Sampayo needs to be in handcuff or reasons for the inability to arrest Sampayo must be revealed in court.

Deputy Solicitor General Peiris further went on to note, according to the investigations there are some prison officers who paid bribes to the Prison Superintendent in order to save their jobs.

These facts have been detailed by the investigating officers in their probe and much more needs to be investigated and it has proven to be difficult in the absence of the chief suspect in the case, highlighted the Deputy Solicitor General.