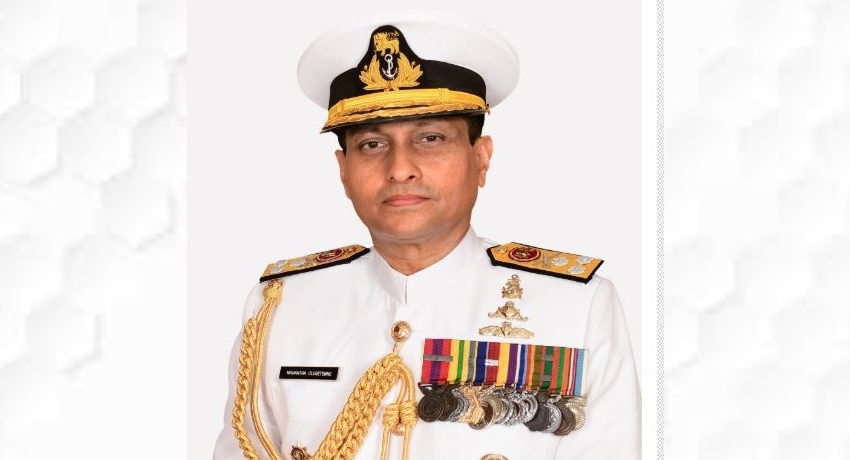 COLOMBO (News 1st): Vice Admiral Nishantha Ulugetenne has been appointed as the new Commander of the Sri Lanka Navy.

The appointment was made by President Gotabaya Rajapaksa on Wednesday (July 15).

Vice Admiral Nishantha Ulugetenne is the 24th Commander of the Sri Lanka Navy and was the Chief of Staff of the Navy prior to his appointment as the Navy Commander.

Vice Admiral Nishantha Ulugetenne is a proud product of the Royal College, Colombo where his leadership traits were first recognized at his young age as a school prefect.

He was also an upbeat member of the Cadet Platoon that went on to win the Hermann Loos trophy twice.

He joined the Sri Lanka Navy as an Officer Cadet of the 13th Intake in 1985 and underwent basic naval training at the Naval and Maritime Academy, Trincomalee.

Upon successful completion of training, he was commissioned as a Sub Lieutenant on 07th January 1987. After being steadily elevated to subsequent ranks in the Navy over the years, he was promoted to the rank of Rear-Admiral on 01st June 2015.

Vice Admiral Nishantha Ulugetenne specialized in the fields of Gunnery and Missiles and was a key member of the pioneering team that introduced missiles to the Navy Fleet.

He also held a range of sea as well as shore appointments during his illustrious career spanning over 35 years.

The senior officer served aboard many Fast Attack Craft and had commanded the prestigious 4th Fast Attack Craft Flotilla, the teeth arm of the Sri Lanka Navy fleet, at the height of the looming terrorist activities.

He also took pride in commanding SLNS Nandimithra in 2009, aboard which he was privileged to be its first Weapons Officer and Executive Officer of the same ship earlier.

Apart from that, Vice Admiral Ulugetenne held office as the Director Naval Intelligence for more than three consecutive years just after the humanitarian operation, during which human smuggling had been brought to a substantial halt and the island managed to seal its shores thwarting the influx of narcotics and illegal drugs.