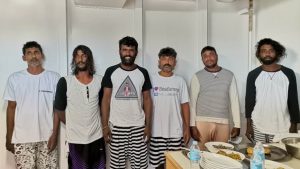 According to reports from India, the fishermen were adrift for four days after their boat capsized.

On Sunday morning, the crew of YM Summit, which was on its way to Visakhapatnam, had witnessed a capsized fishing boat with six survivors atop.

Following this, a message was relayed to the MRCC, Mumbai.

Indian reports said, the MRCC Chennai, which was alerted by its Mumbai counterpart, then coordinated the rescue operation.

The six sailors were reportedly adrift at sea for the past four days and were identified as natives of Trincomalee, Sri Lanka.

MRCC Chennai further coordinated with the Sri Lankan Deputy High Commission, Chennai, and MRCC Colombo to verify the credentials and arrange for their safe return to home,Indian media said.

A spokesperson for the Sri Lankan Department of Fisheries said all necessary documentation to prove the men are Sri Lankans were sent to the Sri Lankan Mission in India adding they will be repatriated to the country based on the flight availability.

The spokesperson said upon arrival the Sri Lankan fishermen will be immediately moved into mandatory quarantine.