Colombo (News 1st);  Former Sri Lankan Cricket Captain Kumar Sangakkara in response to claims made by the former Sports Minister Mahindananda Aluthgamage said as the allegations are very serious, the Ex-Minister must present any evidence available to prove his claim to the ICC.

Sangakkara said the Ex-Minister should also produce said evidence to the ICC Anti-Corruption Unit and request for a proper and complete investigation into his claims.

“Then no one needs to speculate and can get to the bottom of this. That should be the most prudent course of action.”, said the former Sri Lankan cricket skipper to News 1st.

The Former Minister said he made the claim with absolute responsibility and does not wish to expose further details for the sake of the country.

“I would not involve the cricketers in this. However, certain groups were definitely involved in fixing the game”, said Mahindananda Aluthgamage.

Kumar Sangakkara led the Sri Lankan Cricket team in the 2011 Cricket World Cup and resigned from the job three days after his team lost to India in the World Cup final.

Sangakkara posted the following on Facebook on Thursday evening. 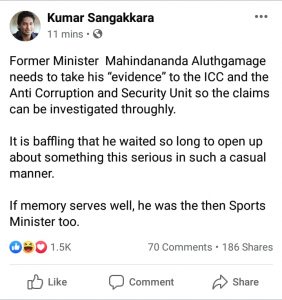