COLOMBO (News 1st): The showery condition in the South-western part of the island is expected to enhance due to the development of low-level wind convergence in the vicinity of Sri Lanka.

“Showers or thundershowers will occur at several places in Western, Sabaragamuwa, Central and Northwestern provinces and Galle and Matara districts,” Issuing a weather advisory, the Department of Meteorology said.

The department forecasts heavy falls about 100 mm at some places.

Wind speed can increase up to 50-60 kmph at times over the island. 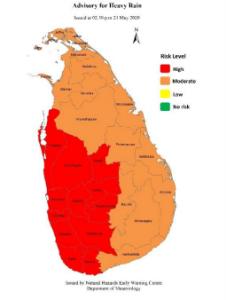 Advisory for strong wind and rough seas issued by the Met Department says deep sea areas to the South and Southeast of the island can be rough to very rough at times as the wind speed can increase up to 60-65 kmph at times.

Other sea areas around the island can be fairly rough at times as the wind speed can increase up to 40-50 kmph at times. 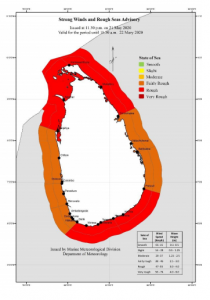 “We request the naval and fishing communities to be vigilant in this regard,” the advisory added.