COLOMBO (News 1st): Landslide warnings were issued for 10 Districts by the Disaster Management Centre on Tuesday (May 19) including for Galle, Kegalle, Ratnapura, Nuwara Eliya, and Kurunegala.

“Following rising water levels in the Kalu River as a result of heavy rains, Ratnapura will be experiencing a minor flood situation,” the Disaster Management Centre said.

According to the DMC for the Ratnapura District the reading in the Muwagama water gauge which monitors the water level of the Kalu River was 7.07 Metres.

The Disaster Management Centre said people living in landslide-prone areas in the Ratnapura District were instructed on multiple occasions to move away from those areas following heavy rainfall.

The DMC also requested the people living in Thawalama, Neluwa, and Baddegama in the Galle District to remain vigilant.

The Met. Department says the Super Cyclonic Storm “AMPHAN” is very likely to move north-northeastwards towards west Bengal coast during the afternoon of 20th May. 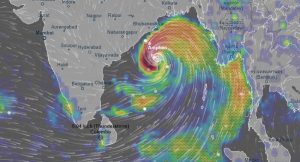 Heavy showers above 100 mm are likely at some places. 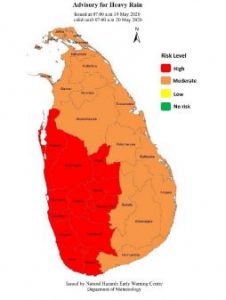 Wind speed can increase up to (50-60) kmph at times over the island.

Cloudy skies can be expected over the island.

According to reports, multiple locations along the Ratnapura – Colombo Road in Kuruvita remain inundated.