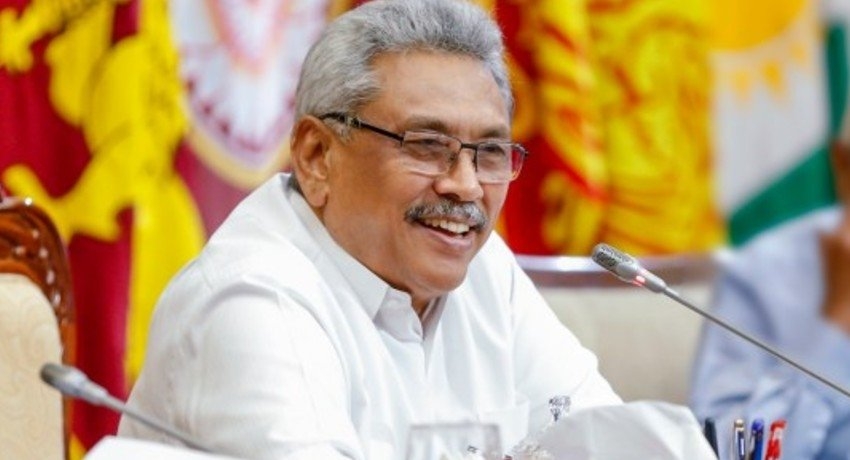 COLOMBO (News1st): President Gotabaya Rajapaksa addressing the nation on Tuesday said it is important that a stable government is established and a budget is passed to fulfil the pledges for a prosperous future spelt in his policy statement.

President Rajapaksa asked the people to rally around him to form a strong government.

“In this moment, our responsibility is to govern the country properly. We cannot allow irregularities from the government for any reason. If we do not work with foresight, the normal social life will be completely disabled,” President Rajapaksa said after explaining the current situation of COVID-19 in the country.

“Leaders must act with self-confidence. They should not create a fear psychosis among people.”

President Rajapaksa also said that the country should minimize all possibilities of the virus from entering and spreading throughout the country.

“We have already identified what needs to be done and have put these into action. We have empowered the Task Force accordingly,” he said.

“We have faced and won over challenges before. We are ready to face the challenges. What we need is unity. Therefore, I ask the people to act with responsibility.”

The President also announced several relief measures including measures to stabilize rice supply, to ensure that people’s lives are not disturbed and that the necessary state services, such as bank finances and transport be continued with the least possible number of people to ease the people’s day to day lives, and their consumption.

The President also said that his administration is in the process of planning more relief to the public.

He said that he ordered banks and finance companies to extend a moratorium of six months’ recovery period for the loan facilities taken by businesses, and banks to give capital at four percent interest.

Given below is the full text of the President’s address;

Salutations to the Most Revered Prelates of the Maha Sangha
Salutations to Religious Leaders of Hindu, Catholic and Islam Faiths
Dear Mothers, Fathers, children

Today, I am addressing you to explain the the steps we have taken and the current status regarding the Coronaviruas, also known as CORVID-19.

This January, while the world was just getting to know about the Coronavirus, I took the decision to bring back the 34 Sri Lankan students who were studying in the Wuhan Province in China. At the time, there was not a single infected case reported from within Sri Lanka. Yet, to face a possible detrimental situation that could arise in the future, on 26 January we established a special National Task Force Committee.

On 27 January, a Chinese lady who had come to Sri Lanka as a tourist was identified to be the first infected case in the Island. She was immediately admitted to the IDH hospital and treated. On 19 February, after recovering fully, she left the country.

A special aircraft flew in the Sri Lankan students from Wuhan to the Matthala Airport, where they were quarantined and then taken to a quarantine center in Diyatalawa that was specially set up for this purpose. They were quarantined for two weeks in this camp and sent home on 14 February. At the same time, the necessary instructions were given to the airport authorities to take steps to conduct a preliminary examination of the health of all those who are arriving via the Airport to Sri Lanka.

After the first case was detected with the infected Chinese lady, for up to about a month, no other case was found. Yet, as there was a danger of this virus being spread to countries apart from China, it was decided to quarantine all arrivals from Italy, South Korea and Iran for 14-days. This decision was taken on 10 March. Accordingly, directing travelers to the Kandakadu Qurantine Center in Batticaloa began. When this process first started, some of the travelers who came from Italy and South Korea vehemently protested against it and some even tried to escape en route to the quarantine center.

On 11 March, the first Sri Lankan infected with the virus was reported. He is a chauffeur-guide to Italian tourists. From the investigations we conducted within and out of the quarantine centers, we found a number of other infected cases and today 34 such cases had been identified. Out of this group, except for four who had arrived from Germany, the rest being from Italy or those who had an association with those from Italy is noteworthy.

From 13 March onwards, quarantining of travelers coming from Italy, South Korea and Iran began. Soon thereafter, travelers from France, Spain, Germany, Switzerland, Denmark, Netherlands, Sweden and Australia were also added to the quarantine list. Presently, all travelers from UK, Belgium, Norway, Canada, Qatar and Bahrain are also being quarantined. However, from tomorrow onwards until further notice, all arrivals into the country has been suspended.

Since setting up the two quarantine centers in Kandakadu and Punani on 10 March, 16 new quarantine centers have been established. By 6 am, this morning, 1,882 travelers had been directed to these centers. Out of this number, 92 had been admitted to various hospitals. At this moment, our biggest problem is the travelers, almost 2,000 in number, who had entered into the country from high risk countries for about two weeks before we actually started the quarantine process on 10 March.

Currently, out of the 34 infected, 19 had been identified from those who are being quarantined after arriving from Italy. The rest are either those who had arrived before the quarantine process began or those who had got infected from those who had come from abroad. Before we started quarantining, we had identified everyone who had come from the above mentioned countries as well as their closest relatives and had asked them to be self quarantined in their own homes. We have deployed the police, the triforces, public health inspectors and grama niladari for this purpose and I request that they be given the fullest cooperation.

I also request that Sri Lankans who had come from other countries too to act responsibly. The reason to give a special holiday was to minimize the spread of the virus. To ensure this, I request you to avoid travel, gathering as a group and from celebrations and parties. By adhering to these instructions along with the steps we had taken, we will be able to completely control this situation.

As a Government, our main responsibility is to ensure community life. The State must intervene to facilitate the various needs of the people.

Certain parts of the country are affected by a drought. We must supply drinking water to those people in these areas. For some areas, to begin the Yala season, we must provide with clay fertilizer. In some other parts, as the harvest comes through the State must be ready to purchase the paddy. If vegetables are not purchased on time, those farmers will face a difficult time. At the same time, the vegetables must come into the market. Likewise, we need to control the cost of living.

If Government Officers did not engage in these tasks, all these will collapse. Therefore, we must look at this whole picture when we take decisions. After the victory on 16 November, we could only establish a minority government. When I came to power, the previous government had not passed the budget. It was through a vote on account budget the country was managed. Money was not approved for many essentials. Dues had not been paid for fertilizer and medicine suppliers, food suppliers and construction workers. We tried to pass a vote on account budget to pay for these arrears. However, the Opposition did not support it. Under these circumstances, it was not possible to fulfill the pledges I had made to you. A minority government cannot approve these finances in the Parliament.

This is the reason that I dissolved the Parliament at the first available opportunity and called for General Elections, so that a stable government can be formed. After dissolving Parliament, with the powers bestowed on me, I passed a vote on account budget. Accordingly, payments to essentials have begun. This also allowed us to meet the challenges of this current disaster.

However, it is important that a stable government is established and a budget is passed so that I can fulfill the pledges for a prosperous future spelt in my vision statement and activate my development plan which includes providing relief, creating employment, and uplifting the agricultural sector. Therefore, I ask from you to empower me with a strong government led by Mahinda Rajapaksa, who as a matured politician is loved by the people. In this moment, our responsibility is to govern the country properly. We cannot allow irregularities from the Government for any reason. If we do not work with foresight, the normal social life will be completely disabled. Leaders must act with self confidence. They should not create a fear psychosis among people.

At this moment, we must minimize all possibilities of this virus from entering and spreading through the country. We have already identified what needs to be done and have put these into action. We have empowered the Task Force accordingly.

We have faced and won over challenges before. We are ready to face the challenges. What we need is unity. Therefore, I ask from the people to act with responsibility.

In the meantime, to ease the people’s day to day lives, and their consumption, I have proposed a stabilized rice supply. To ensure that people’s lives are not disturbed, the necessary State services, bank finances, transport to be continued with the least possible number of people. In every market place, from tonight (17) midnight, I have ordered that the maximum retail price of dhal per kilogram to be no more than Rs. 65.00. Likewise, steps are taken to keep the price of a sardin tin at Rs. 100.00. We are in the process of planning more relief to the public.

I am also ordering banks and finance companies a recovery period of six month from the loan facilities taken by businesses, as it is a huge burden on them presently. At the same time, steps are being taken for banks to give capital at four percent interest. I assure you that I will not break any of the pledges I had made before you. This country, that’s yours and mine, is secure today.