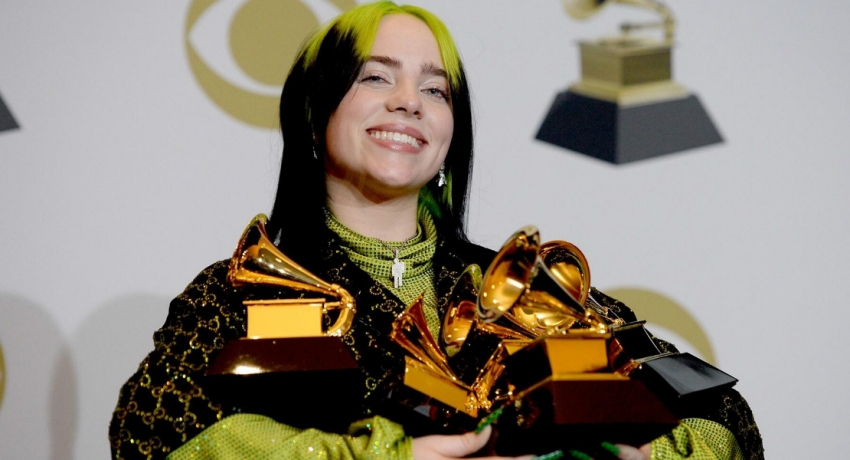 Eilish, an 18-year-old newcomer, won for her debut studio album “When We All Fall Asleep, Where Do We Go?” and her single “Bad Guy” was named record of the year and song of the year.

“So many other songs deserve this. I’m sorry. Thank you so much, this is my first Grammys, I never thought this would ever happen in my whole life, I grew up watching them,” said Eilish as she won song of the year for her hit Bad Guy.

The Los Angeles singer recorded the album with her brother Finneas in his bedroom.

“We didn’t make this album to win a Grammy. We wrote about depression and suicidal thoughts and environmental change,” he said as the pair accepted the awards. “We stand up here confused and grateful.”

“Thank you to the academy, first of all, this is really fucking sick, unexpected, really cool, but I just, I want to say, you know This whole week, you know, I’ve been lost in my problems, stressed out, and then in an instant, all of that can go away and your priorities really shift and today, all of my little problems that I thought were the biggest in the world were gone and I realized that there’s people hurting right now and you guys create beautiful music,” said an emotional Lizzo.

“You guys create connectivity and I’m speaking to all of you in this room. We need to continue to reach out. This is the beginning of making music that moves people again – making music that feels fucking good, that liberates people,” added Lizzo.

The Grammy Awards opened with a dedication to basketball star Kobe Bryant, who died in a helicopter accident outside Los Angeles earlier in the day.