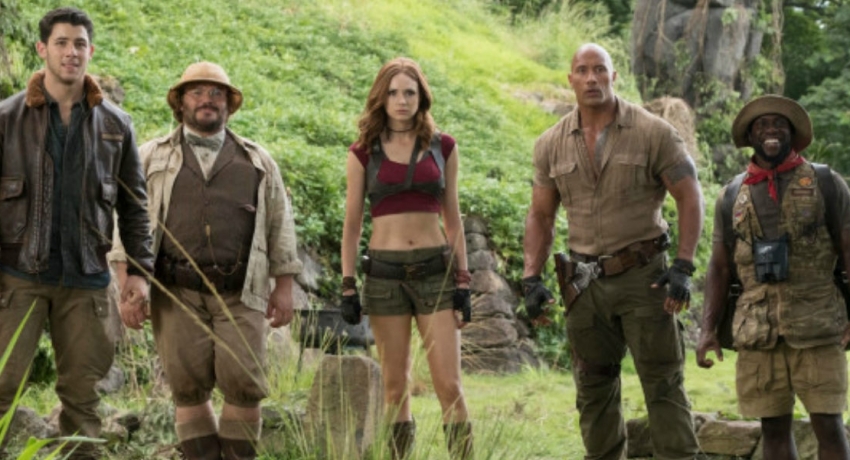 Reuters: The stakes were high when Sony Pictures decided to reboot the beloved 1995 Robin Williams classic ‘Jumanji’ in 2017 with ‘Jumanji: Welcome to the Jungle’.

However, the gamble paid off and the film, which saw high school teenagers inhabit the body of avatars in a jungle situated computer game, raked in over $962 million dollars against its reported $90 million budget.

During the filming of the reboot, the film’s stars Dwayne ‘The Rock’ Johnson, Karen Gillen, Kevin Hart, Nick Jonas and Jack Black all regaled stories of being attacked by insects while filming in the jungles of Hawaii.

The film moves to new settings in the new sequel ‘Jumanji: The Next Level’ and at the world premiere in Los Angeles on Monday (December 9), the cast spoke about the issues they had this time around.

“Very racist, racist camels,” said Hart of the new challenges, adding “They gave me a camel which just grunted all the time.”

But it wasn’t just the animals. Karen Gillen told Reuters “We’re not just in the jungle anymore. We’re in snowy mountains and we’re in the desert with loads of camels. I will say, seeing Kevin in those environments, he was not coping very well with the animals. I don’t know. I didn’t do too well with the cold mountain.”

Jack Black, who famously in the previous film played a high school cheerleader trapped in a tubby scientist’s body, had a new character to play, which terrified him.

He said “The director, Jake Kasdan, was like ‘We’re going to be shuffling up the cards. Everyone’s going to be playing a different role. I want you to play Fridge. Are you comfortable with that?’ and I was like *gulp*. I was a little scared of it, to be honest with you because it was a challenge I’d never done before and it’s sensitive times and playing an African American character, I was like ‘I’m up to the challenge’ but I really worked hard because I didn’t want to get it wrong. Do you know what I mean? So hopefully I did the part justice.”

Awkwafina rounds out the cast as a new computer game avatar called Ming. The actress/comedian/musician woke up that morning to discover that she had been nominated for her role in sleeper indie hit ‘The Farewell’.

She told Reuters “It feels incredible. I don’t think any of us really knew how they film would be received. We just knew… Well, I knew that I resonated with it but it’s been an incredible ride so yeah, the news this morning, it was very emotional and it was surreal, yeah.”

Her nomination comes at a time in Hollywood where representation of Asian American actors has become an important issue.

“What I want young people to know is that if you want to break barriers, you can do it by being yourself,” said Awkwafina. She added “I think that’s one thing that I did and I want there to be more. If you show people that it’s not necessarily doing major things but just not being afraid of being yourself.”

‘Jumanji: The Next Level’ which has already made $53 million dollars in the worldwide box office when it was released last week, is set to debut in the United States on December 13.

Robin Williams hanged himself due to depression over R...

Robin Williams hanged himself due to depression over R...