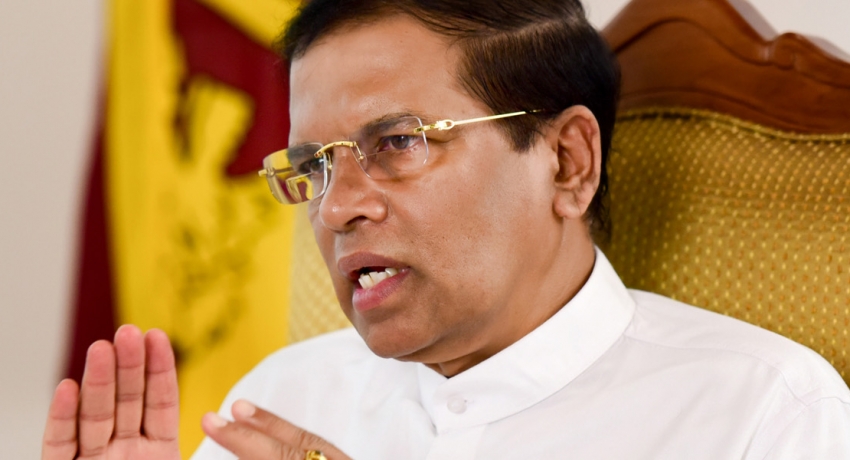 Colombo (News 1st): Several ceremonies were held yesterday (November 14) and today (November 15) to commend the service rendered by President Maithripala Sirisena. The President arrived at the Police Department premises this morning and was warmly welcomed with polite salutations.

The ceremony was organized to commemorate the service rendered by the President on behalf of the Police Department. Acting IGP C.D. Wickremaratne and senior police officers were present.

“I participated in a large number of ceremonies during the past 2 weeks, I believe its a blessing I received during my tenure. The other fact is that the first election in this country was held in 1947. The form that point onwards no state leader has been unbiased during elections. This election is a peaceful one. One reason for that is the President who is the defence minister is in charge of the defence ministry and the Police. The minister in charge of peace and justice should act in an unbiased manner during elections. I honour the Police department and the IGP. Especially I was able to work with the police department for a short period of like 11 months, during that short period we were able to tackle issues that we struggled with for over 25 -30 years. Drugs, illicit liquor, and certain issues that were believed to surpass police powers. During the past few months, we were able to form laws, get them passed in the parliament and to vest those powers with the police department. I’m glad about that. It was essential to vest those powers with the Police.”

Meanwhile, a special ceremony was held in Colombo last evening to present the salutary tributes of the Army, Air Force, Navy and Armed Forces to the President. The President was felicitated for the service rendered during his tenure for strengthening the security forces and securing the dignity of the armed forces.

The Secretary to the Ministry of Defence, the Commanders of the three Forces and security heads were also present. Meanwhile, all Vice-Chancellors of Universities met President Maithripala Sirisena yesterday (November 14) and appreciated the work done by him during his tenure.