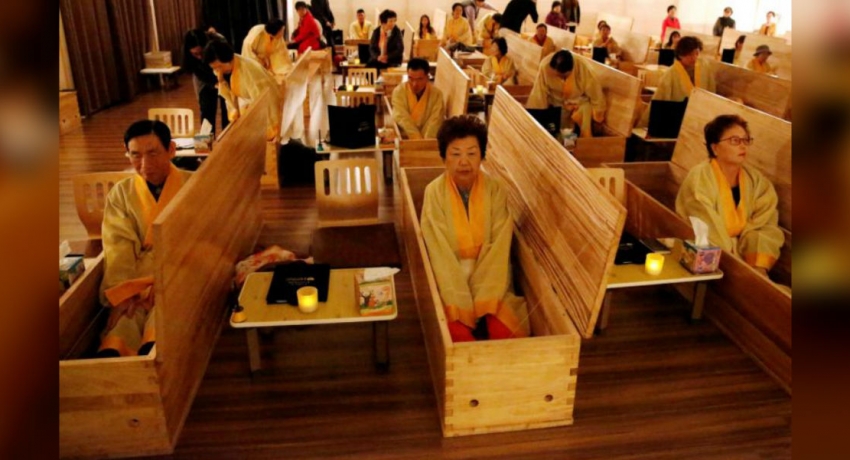 Reuters-More than 25,000 people have participated in mass “living funeral” services at Hyowon Healing Center since it opened in 2012, many hoping to improve their lives by simulating their deaths. Dozens of people from teenagers to retirees were seen wearing shrouds and feigning death inside coffins in central Seoul.

A 28-year-old university student, Choi Jin-kyu, was one of them. In a highly competitive society, Choi, who decided to start his own company after he graduates rather than get a job like many others, said the experience can be cathartic.

After writing a will in front of his funeral portrait, Choi said that people used to think of the person next to them as a competitor they must beat, not a companion. “When I was in the coffin, I wondered what the point of that was,” he said.

“I want to let people know that they matter and that someone else would be so sad if they were gone. And that happiness is in the present,” Choi said while wiping tears.

Jeong said he is heartened when people reconcile at a family member’s funeral but is saddened that people wait that long.

“We don’t have forever,” he said. “That’s why I think this experience is so important; we can apologize and reconcile sooner and live the rest of our lives happily.”

Occasionally he has to dissuade those who may be contemplating suicide, Jeong said.

“I look out for those people who have thoughts of fear or question whether they can actually go through with suicide, and I reverse their decision,” he said.

Among the participants taking the ‘well-dying’ program were 12 people from a senior welfare center who were in their 60s or older.

After lying in a closed coffin for around 10 minutes, Cho Jae-hee, 75, emerged from her ‘living funeral’ and said that preparing for death was necessary for them to have a good life.

“This provides an opportunity to think about which way is the best way to leave. Once you become conscious of death and experience it, you undertake a new approach to life,” said Cho.