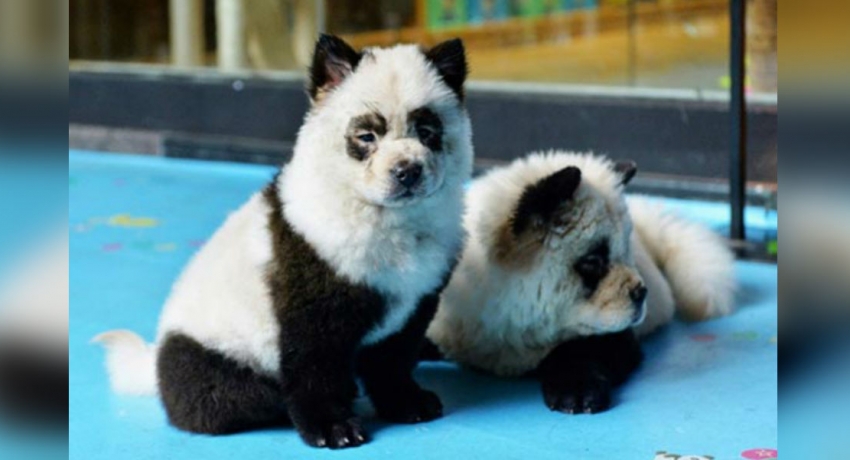 Co-founder of the recently opened “Candy Planet Pet Cafe” and owner of the Chow Chows, Lu Yunning, said that he and his fellow business partners wanted to give their cafe a unique selling point.

“Currently, there are many dog cafes, cat cafes, raccoon cafes, alpaca cafes, duck cafes. We think they are not creative. We want something novel,” 21-year-old Lu said.

So far in terms of visitor numbers it has paid off. They have nearly doubled to 70-80 vistors per day since Lu posted pictures of his panda-like dogs on social media, he said.

However some including animal rights group PETA are less impressed with his panda-dyeing.

“There are far better ways to show appreciation for pandas than by using sensitive dogs as dyeable decorative displays,” PETA said in a statement attributed to PETA Asia Vice President Jason Baker.

“Coating dogs with chemical dyes is stressful and can even cause allergic reactions on their skin, nose, and eyes. PETA urges travelers to stay away from any business that exploits animals for a money-grabbing gimmick and social media “likes,”‘ the statement added.

Lu says he used imported dyes on his dogs and he said he is sure that it is not harmful for the dogs. He also added that he dyed the dogs’ hair from the middle of the hair rather than the bottom.

Lu’s cafe also offers a pet bathing, showering and pet-hotel service and even a pet dyeing service, charging 1500 Yuan ($212) per pet that is dyed. But so far customers have appeared more interested in taking photos with Lu’s dogs than signing up for his dyeing service.

When asked what he will do when the dye grows out and his pet dogs start to look more like Chow Chows again Lu said he will dye them again to look like pandas, and continue doing so for a long time to come.

Colombo tops list of fastest growing cities in the world

Colombo tops list of fastest growing cities in the world