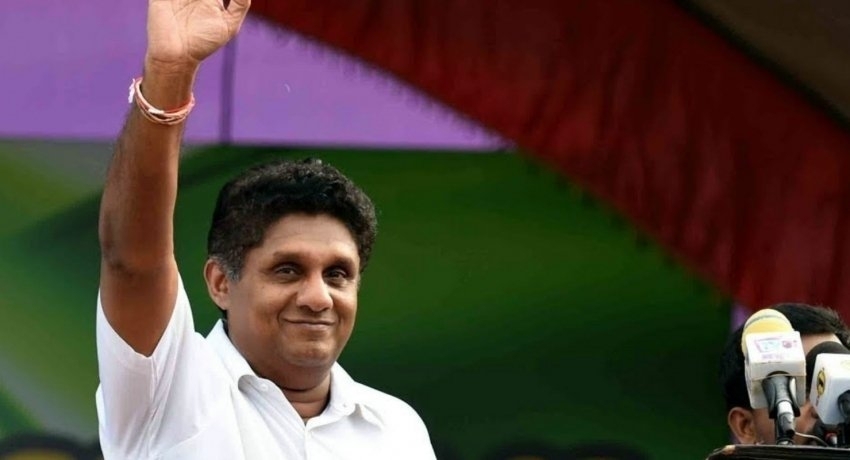 Sajith Premadasa was warmly welcomed by those present at a public rally in Divulapitiya, Gampaha today.

“My opponents are slinging mud at me for a recent statement I made, over a progressive decision I took on behalf of our women community. Women, the symbol of life, are facing a severe problem at present. A majority of women do not follow proper sanitary procedures during menstruation. As a result, they suffer several severe medical complications.

Particularly womb cancer. Nearly 70% of women in Sri Lanka have fallen victim to this medical condition. Only 30% of all women follow proper sanitary procedures. How can we be numb to this issue? We understand the value of a woman and understand their pain.

We will initiate sustainable solutions for all of these issues. I make this very clear: No matter who, or how many sling mud at us, we as a future government will provide sanitary facilities to all women, who are deprived of it. That’s not all.

We will establish a medical unit at every school, which provides education to girls. Sajith Premadasa will empower and develop the 51.8% female population of this country.”

We will not allow terrorism to raise its head again in this country. Together with the police and military, we will establish a strong unit to eradicate the drug menace and terrorism in Sri Lanka.

We will provide security for everyone. We will never use our war heroes to turn against the general public. The war heroes exist to protect our country and its people only.”

“It’s been some time since I challenged my opponent to come forward for an open debate with me. However, as usual, my opponent runs away from the issue and ignores it.

I challenge him once again, if he finds it uncomfortable to come forward for a debate alone, come with your team, and lets have a debate.

Now, they use politically immature persons to respond, saying we can have a debate if it is sent in writing. There is no time to write love letters now. If there is a backbone, come forward for an open debate with Sajith Premadasa. We can have the debate in Biyagama, at the Export Processing Zone.”

Question: “I would like to know what kind of security measures will be taken for especially the Malays and the Sri Lankan Muslims in relation to the incidents especially during the last 5 years. During the Rajapaksa regime and the Yahapalanaya government. If am I to rephrase the question, how would you be able to avoid such racial disharmony taking place again.”

“Well as the President of the country, it is my duty to protect the people from all ethnic and religious backgrounds. To protect them equally. So there will be no discrimination in favour or against any community or any religion. However, the best way to end hatred and extremism in society as a whole we need to have a very proactive programme led by the President of the country to ensure that there is togetherness in the society.

Because of various events and incidents and the cumalative impact that it has had, mutual suspicion, mutual mistrust, continue to exist and persist in our society. So the most important manner in which you can pay attention to this problem is to ensure that social harmony and comradery among all the ethnicities and all the religions are established.”