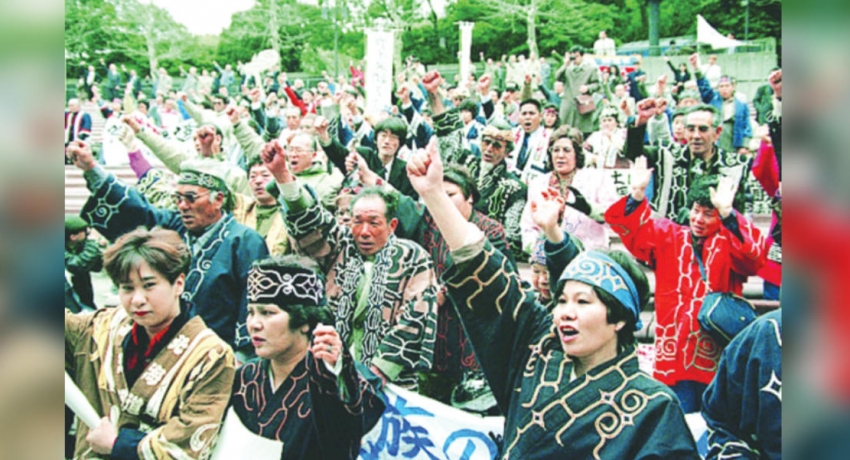 Reuters – Hoisting his shotgun and dressed in a bright-orange high-visibility jacket, Atsushi Monbetsu looks like any other modern hunter. But the 36-year-old enters the forest not just to shoot game, but also to pursue his identity as Ainu, an indigenous people mainly inhabiting Japan’s northern island of Hokkaido.

When Monbetsu turned 30, he acquired a license to own a shotgun, realizing his childhood dream to be a hunter. Two years later, the father of three decided to quit his job as a construction worker, to make his living as a professional hunter.

“In the past, hunters could be making a living by eating meat that they hunted. But now we need money to live. So I’m still looking for a way to make money from hunting,” said the 36-year-old, who lives with his ‘Wajin’ (ethnically Japanese) wife and three children in the town of Biratori, known for its Ainu cultural museums.

According to a survey conducted by the local government in 2017, more than 13,000 Ainu people like Monbetsu are estimated to live in Hokkaido. That makes them a mere 0.3 percent of the island’s population and almost half of what it was 10 years ago. However, many Ainu people, one of the most marginalized groups in Japan, believe that the population could be 10 times greater than the official census, as there would be those who would not publicly identify as Ainu for fear of discrimination.

Monbetsu usually enters the forest to hunt when the sun rises. He burns a sprinkling of birch shavings and holds his hands upwards in the smoke in prayer to the Ainu gods before he sets out.

During a recent hunting trip, he showed Reuters his kill — a common deer shot by a single bullet, for which he will get paid 13,000 yen ($120) by the local town hall for his effort in culling the growing deer population.

Although he barely eats the meat of the deer he caught, Monbetsu sometimes uses deer antlers and skins to make crafts, jewelry, and decor for himself and his friends. The carcasses of the deer are usually incinerated and disposed of by the town.

While hunting was a centuries-old practice, the Ainu were only recently officially recognized as an indigenous people in Japan. After five centuries of sometimes brutal oppression and forced assimilation, the Japanese government in April enacted the so-called “Ainu New Law”, which requires central and local governments to ban discrimination against the Ainu and to promote Ainu’s culture, traditions, and tourism.

Monbetsu said when he was younger, he had faced verbal abuse on the streets for being Ainu, whose appearances are usually distinct from ethnic Japanese.

“Being Ainu is not always comfortable as I had very unpleasant experiences. There were times when I wished if I wasn’t Ainu actually,” he said.

Almost a quarter of Ainu said they had experienced discrimination in the 2017 survey. But now, through hunting, Monbetsu realised the importance of preserving the Ainu culture.

“There are so many great things about the Ainu culture and I want to preserve this wonderful culture. I’m working on it in the hopes that it would lead to a deeper understanding,” said Monbetsu, while preparing traditional Ainu tents for a summer camp to invite young students to experience the culture.

However, for some of the Ainu, they would like to see more concrete actions from the government.

“I believe they (Japanese government) should return some mountains, rivers, and places to Ainu people so we will be able to continue our traditional activities freely,” said Monbetsu.

The original inhabitants of Hokkaido, the Ainu also lived elsewhere in northern Japan as well as parts of the Russian controlled Kuril and Sakhalin islands. Primarily hunter-gatherers, the Ainu, who wore clothing made of tree bark and worshipped a multitude of gods that inhabited the natural world around them, fished for salmon and pursued deer and other game in a thick forest that still covers much of the region. With no written language much of their early history is, however, unknown.

In 1869 as Japan began forging an empire after more than two centuries of self-imposed isolation it annexed Hokkaido and established a colonial authority that brought in a rush of Japanese settlers that the Ainu refer to as “Wajin”. Ainu languages and customs withered under a policy of forced assimilation that outlawed many of their practices.