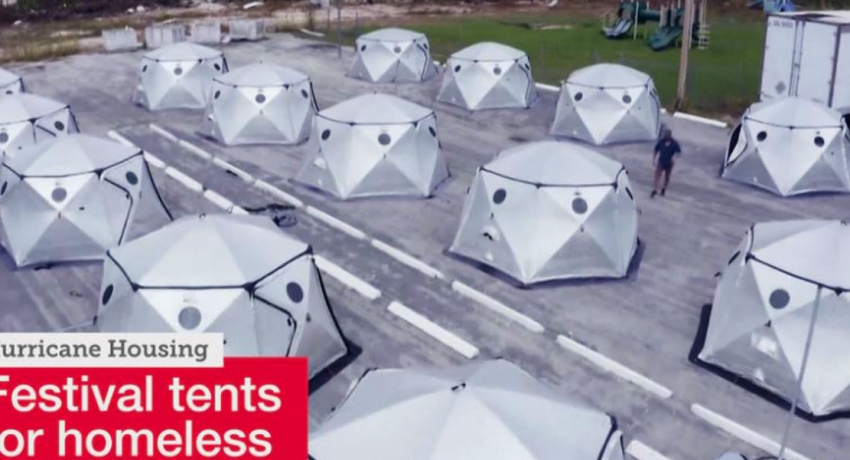 Reuters – A music festival organization is taking its temporary accommodation skills to the Bahamas, to help people made homeless by Hurricane Dorian.

Last year at their flagship festival in Las Vegas, Insomniac — the company behind EDC (The Electric Daisy Carnival) — housed 25,000 people in their luxury festival Shiftpods, which are air-conditioned and have electrical outlets.

After seeing the devastation wrought by Hurricane Dorian, the company’s CEO and founder, Pasquale Rotella, insisted that his staff take their skills and 750 of the pods to those suffering in the Bahamas in the hope of housing 5,000 people – at a cost of over $1 million.

Debris, pollution and the rocky limestone bed of the Bahamas has slowed deployment of the pods and they are still being erected.

However, for the executive director of production, Alyxzander Bear, it has all been worthwhile.

“I don’t want to create any similarities but the smiles on people’s faces from one of our events was the same smile on these people’s faces when we were erecting these pods that they were so grateful and so thankful that they had something other than a canvas stretched across a couple of broken-down trees,” Bear told Reuters in an interview on Wednesday (September 25).

When asked why a music festival production company would choose to enter the humanitarian world, Bear said, “The music festivals that we produce are more than just music festivals. I think we create an environment where people can be free of any restrictions and be themselves and be accepted by everyone so there’s that mentality that we’re kind of all the same and from the same base, let’s call it.”

The pods themselves are weather resistant and designed to deal with winds of up to 60 miles per hour. They are meant to house six people at festivals. However, Bear said that one family of 11 in the Bahamas lived together in one comfortably.

After seeing the devastation first hand, Bear realizes that more can still be done by Insomniac for people affected by natural disasters.

“If we want to do this properly, we’re going to have to do pretty much an exact copy that we do at the festivals,” said Bear, adding “At the festivals, Vegas especially, we create housing and we have food service and medical service. We literally build a city in Las Vegas. We need to do that in the Bahamas.”

The company is trying to bolster its charitable efforts in the Bahamas by setting up a GoFundMe page to raise more money.