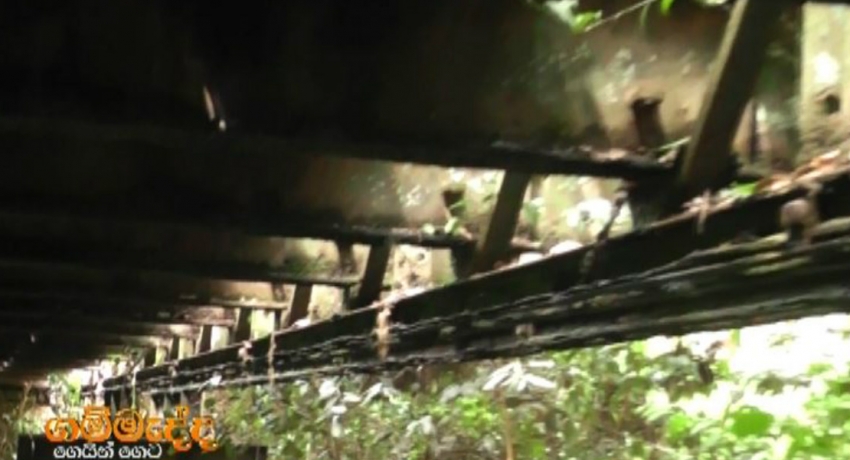 COLOMBO (News 1st): As the count down begins for the Presidential election, the leaders of this nation are blinded by the greed of remaining in power or gaining power. Against such a backdrop they turn a blind eye to the struggles of the people of this country.

In our journey of giving voice to the voiceless, our Gammadda team came across people whose everyday lives were an upward battle. A village situated on the outskirts of Kotmale is posed with the risk of being cut off from the town. The bridge that is the only road that connects this village to the main city dangerously sways in the wind.

Wataddara is the last remaining village in Kotmale. This bridge was built in 1984 by the Ministry of Mahaweli Development. Now it has been 40 years since its initial construction and yet there is no sign of modification to this bridge.

The villagers of Wataddara have a bus, still, they opt to travel on foot. That is owing to the fact that the bridge dangerously sways in the wind, thereby the villagers would rather walk than risk traveling in the bus on this swaying bridge. They have to walk 5 km to board a bus which leaves Nawangama at 6.00 am. If the villagers have a function in the night, they still have to leave early in the morning. The villagers are exhausted collecting the falling pieces of this bridge.

Meanwhile, we also came across an ancient temple that was built in the time of King Dutugemunu in Pusul which is slowly fading into history as a result of the negligence of the authorities. This ancient temple is situated in Nawangama, Pusulpitiya in Kotmale. Folklore says that as a Prince, Dutugemunu from the age 12 to 29 spent most of his time in this holy site.

History stands to say that this is where King Dutugemunu’s coronation ceremony took place. It is also believed that the Sacred Tooth Relic was hidden to prevent it from falling into the clutches of the invaders. This temple is known as the Dalada Sapuwa. The chief prelate asks that this sacred site be protected for future generations.

Seeing an ancient holy site crumble and fade into nature is a heart-breaking concern that should be addressed.