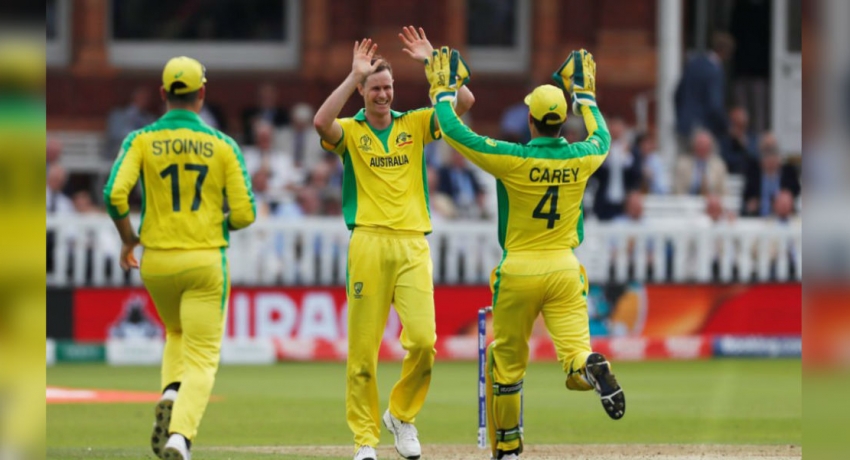 Reuters – Jason Behrendorff had only ever visited England on holiday before the World Cup and the hosts would rather it had stayed that way after the Australian’s five-wicket haul at Lord’s on Tuesday (June 25).

The 29-year-old left arm fast bowler meant business from the moment he took the new ball and dismissed James Vince for nought with the second delivery of the innings.

The old enemies England, pre-tournament favourites, were beaten comprehensively in front of their home ‘Barmy Army’ of fans by 64 runs as Australia cantered into the semi-finals.

Australia has gone on to win the World Cup every time they have reached the last four and will be well-fancied for a sixth title.

Behrendorff had made his World Cup debut against Sri Lanka at The Oval only 10 days earlier, claiming his first wicket of the tournament, and took the place of Nathan Coulter-Nile at the home of cricket.

It was an opportunity that, in a career punctuated by injury, might never have come but the new ball specialist repaid the selectors’ faith in spades with three wickets for 16 runs from his last three overs.

“Some days, especially during all the rehab periods, you think, ‘am I going to get back; am I going to be able to get out there and play for my country’. And it’s one of those things you dream of as a kid to play cricket for Australia; and then to come here and play at Lord’s my first time here… We trained here the other day and my first game here, so yeah, it was something special,” he told reporters.

Before Tuesday, Behrendorff had taken only eight wickets in his seven previous one-day internationals.

He and the more glamorous left-armer Mitchell Starc proved a lethal pairing, taking nine wickets between them.

“Sometimes you play three right-armers, so why can’t we play two lefties? Yeah, Mitch and I do do different roles throughout the team, so it’s really good that we could partner together today,” he said of the pairing.

“I think both this game and the last (Sri Lanka), we struggled with the basics of what we call our batting mantra. You know, strong intent, building partnerships, and doing it in our own way,” Morgan said.

England’s third loss of the World Cup leaves them in danger missing out on a top-four finish in the standings needed to reach the semis — a situation that seemed highly unlikely when they were routinely smashing over 300 against all-comers to earn themselves the 50-over format’s number one ranking coming into the tournament.

They are still fourth in the standings and may need to beat India and New Zealand in their last two matches to make the last four – though they could still advance even if they lose both.

They have not beaten Australia, India or New Zealand in a World Cup game since 1992 – a total of nine defeats and a tie.

“Yeah, (our chances to advance are) still strong. The chances are in our hands. Everything is within our control. We just need to produce a performance worthy of winning either one or the next two games,” Morgan said.