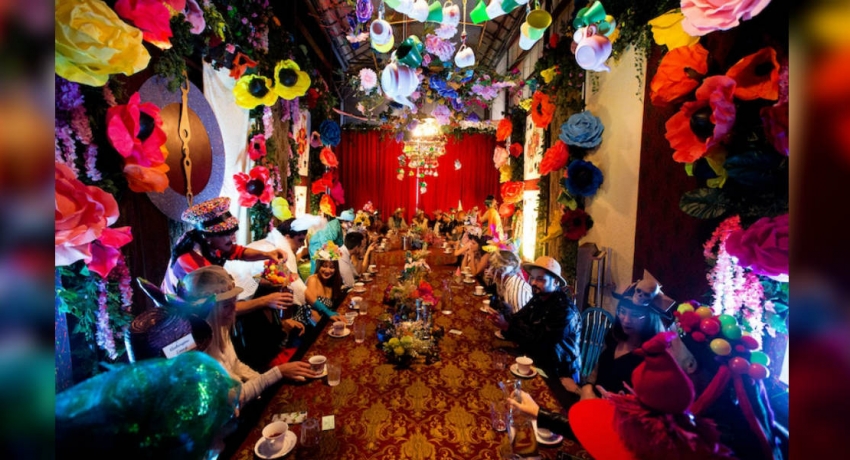 Reuters – Lewis Carroll’s “Alice’s Adventures in Wonderland” may have been published more than 150 years ago, but the story of Alice falling down a rabbit hole has captivated and delighted children and adults for generations.

Now, an immersive and alcohol-fueled ‘Mad Hatter Gin and Tea Party’ has arrived in Los Angeles’ Hollywood neighborhood, allowing adult ‘Alice in Wonderland’ fans to dress up in extravagant hats and interact with some of Carroll’s most-beloved characters, including the Hatter, Dormouse and the Cheshire Cat, all while drinking strong gin and tea cocktails made.

Upon arrival, the tea party guests must choose a hat, the more flamboyant the better, and listen for instructions from the ‘Cheshire Cat’ before they are allowed into the tea party.

Once inside, the guests are seated for tea and are invited to interact with the actors and collaborate with them when preparing the gin-infused tea cocktails.

“I have a daughter so obviously she was like ‘where are you going?’ so I was honest, I was like it’s ‘Alice in Wonderland’ but it’s for adults only, it’s not for kids,” said Sheri Cole, a 38-year-old from Los Angeles who attended the ‘tea party’ with three of her girlfriends.

“When I signed up for this I didn’t know what I signed up for. So when they introduced it as an immersive theater experience, I was actually really excited because I always had a love for fine art and this is a new experience, I’ve never tried it before. So, I really enjoyed it and I appreciate the actors and all the efforts they put into it, so it was fun, I really enjoyed it,” added Echo Lau, another reveler.

For a $60 admission fee, attendees of “The Mad Hatter Gin and Tea Party” receive a welcome drink followed by three cocktails, each served with a light snack.

“It’s always a different show every night. We have a script but it is always going to be different, especially being here in Hollywood, especially with all the drinking that goes on. It’s fun to either wrangle them in or to help them keep getting even more rowdy,” said actor John Ryan Benavides, who plays the Cheshire Cat and Dormouse in the production.

“The Mad Hatter Gin and Tea Party” is on now in Los Angeles.