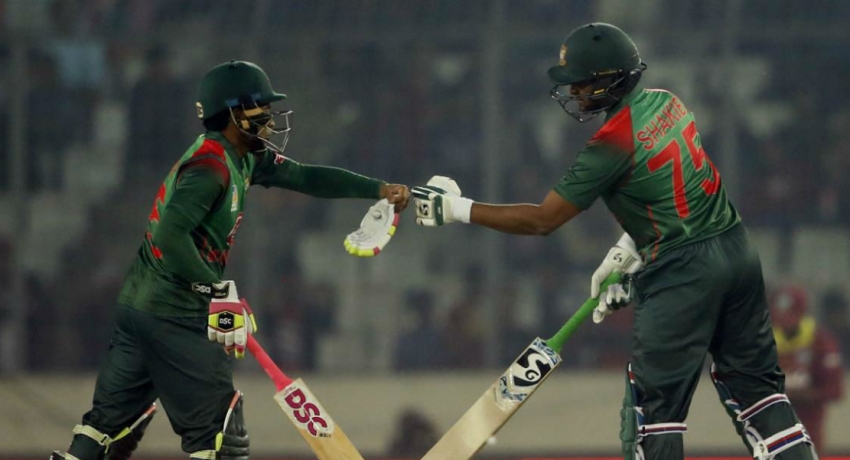 Chasing 322 for a famous victory, Shakib took complete control with an unbeaten 124 off 99 deliveries, as his ninth ODI century guided Bangladesh home with 51 balls to spare.

The 32-year-old captain became the second Bangladesh player to pass 6,000 runs in ODIs after Tamim Iqbal, making his fourth consecutive 50-plus score to move past Australia skipper Aaron Finch as the tournament’s top scorer with 384 runs.

Only Ireland has chased down a bigger total when they scored 329-7 to beat England in 2011.

After Bangladesh started strongly through openers Tamim (48) and Soumya Sarkar (29), Shakib and Das added 189 runs for the fourth wicket to take the game away from West Indies.

World Cup debutant Das, who smashed Shannon Gabriel for three consecutive sixes in the 38th over, scored the winning runs with a boundary off the same bowler.

West Indies opener Shai Hope made a patient 96 while opener Evin Lewis and Shimron Hetmyer also made half-centuries to help the Caribbean side post 321-8 after being asked to bat first.

Hope anchored the innings superbly with his 121-ball knock while Lewis hit 70 before Hetmyer’s 26-ball 50 and skipper Jason Holder’s 33 off 15 balls boosted the West Indies total.

Bangladesh, who are fifth in the table with five points, meet holders Australia on Thursday while West Indies play New Zealand on Saturday.