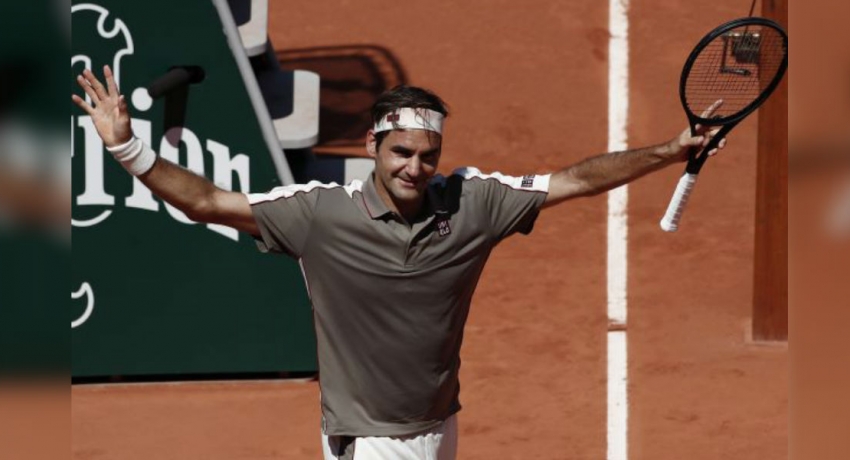 Reuters – Roger Federer’s dream return to the French Open continued as the Swiss waltzed into quarter-finals by giving Argentine Leonardo Mayer a 6-2 6-3 6-3 masterclass on Sunday (June 2).

The 20-time Grand Slam champion, back at Roland Garros after a three-year hiatus, edged closer to a potential semi-final showdown with champion Rafael Nadal by cruising through the opening rounds seemingly unchallenged and his last-16 encounter was no exception.

On Sunday, the 37-year-old played effortlessly, smacking winners around the court with self-confidence.

Mayer offered some semblance of resistance in the third set until the sixth game, when Federer broke decisively, ending his opponent’s ordeal on the first match point.

“Big serving, windy, it was tough conditions. We didn’t have many baseline rallies, to be quite honest, that were sort of neutral,” said Federer.

“Either one was always pressing and the other guy was defending.”

It was Mayer who did most of the defending against Federer, who won his only French Open title 10 years ago.

Federer showed off his repertoire — the single-handed backhand, some chip-and-charge tennis, sliced backhands — to dispatch the Argentine on Court Philippe Chatrier.

With the Big Three — Federer, Nadal and world number one Novak Djokovic — showing little signs of giving up their stranglehold of men’s tennis, the Swiss is aware that when they do eventually retire, it will leave a gaping hole in the sport.

“It’s hard to reinvent the wheel. But of course, maybe Rafa, Novak, and me, we have something special, whatever that is. It’s maybe a combination of many things,” said Federer.

“But sure, I think a lot of my fans or Novak’s fans or Rafa’s fans, when either one of us retires, we’ll feel a bit of a void. But I think it will just take a few years after that to fall in love with another player,” he added.

Federer also weighed in on a press room controversy after Dominic Thiem accused Serena Williams of showing “bad personality” after he was asked to interrupt a post-match news conference to make room for the American following her French Open defeat.

Federer said he understood the Austrian fourth seed’s frustration, but tried to make light of the hullabaloo by calling it “a joke.”

“I don’t think he’s mad at Serena or anybody. So, I just think it was an unfortunate situation that I thought was funny and we joked about it just before,” he said.