REUTERS: The Toronto Raptors, with the support of an entire nation behind them, won the first NBA Finals game played outside the United States with a thrilling 118-109 victory over the two-time defending champion Golden State Warriors on Thursday (May 30).

Toronto were led by Cameroonian forward Pascal Siakam, who scored a playoff career-high 32 points while Golden State’s sharp-shooting duo of Stephen Curry and Klay Thompson failed to find their usual groove in opening game of the series.

Toronto led by 10 points at the half and Siakam, who two years ago was playing in the NBA’s development league, did his part to prevent the Warriors from closing the gap as he went a perfect 6-for-6 shooting in the third quarter. Toronto led nearly the entire way and built a 12-point lead, their largest of the game, when Danny Green drained a three-pointer from the corner that whipped the crowd into a frenzy with seven-and-a-half minutes to play.

The Warriors, who are trying to become the first NBA team to win three consecutive titles since the Los Angeles Lakers did it in 2002, got to within eight points but the Raptors held firm and padded their lead in the closing minutes.

The Warriors are not too familiar with the Raptors and were largely undone by 16 turnovers and a weak transition defense that surrendered 24 fast-break points. Toronto, came out firing in their Finals debut and were not intimidated by a talent-laden Warriors team who are playing in the NBA’s championship series for a fifth consecutive season.

Playing in front of a raucous crowd that included two-time Masters champion Bubba Watson, the Raptors used a bevy of early three-pointers to take control and while the Warriors did well to keep it close Toronto closed the half on a wild 19-8 run. Game Two of the best-of-seven championship series in on Sunday in Toronto. 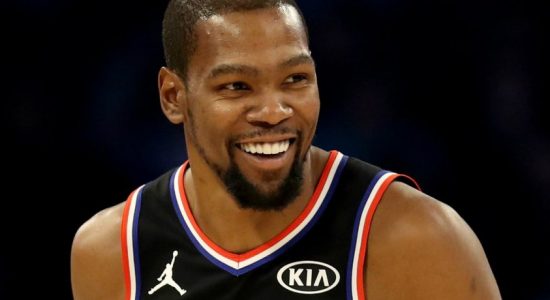