COLOMBO (News 1st): Security forces including the police, STF and the Army conducted search operations in several areas across the island today (May 25).

During a search operation conducted this morning (May 25) around the Bathutha road in Matara, the security forces seized clothing similar to military attire and CDs of a questionable nature.

The army discovered two buildings constructed on an ancient land in the midst of ruins in Athirikgama, Gammirigaswewa. Security forces suspect that these buildings were used as Islamic teaching centres.

In a special search operation conducted in a housing complex in Mattegoda, security forces discovered clothing similar to that of military uniforms.

Security forces have seized a laptop, a mobile phone, multiple CDs and computer hardware components in search operations conducted in the areas. An individual was also arrested on suspicion.

Twelve swords and scope of a firearm along with two suspects were arrested from Mawathagama, Thalgaspitiya.

The security forces seized a pair of binoculars, a painted van, three swords and a gas mask in search operations conducted in these areas. The owner of the seized van was requested to produce himself at the Koswatta police station.

In addition, search operations were also carried out in the Enderamulla town, several areas in Avissawella and surrounding areas. 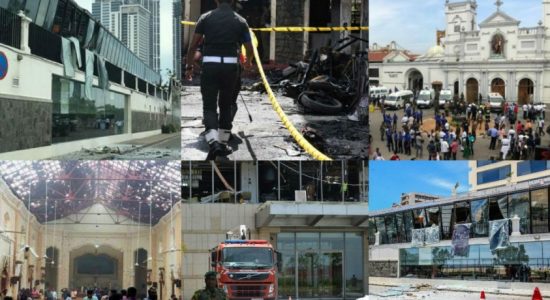