7.07: 35 foreigners among the victims of the bomb blasts in Sri Lanka.

5.30: Police Media Spokesperson notes that they are unable to provide details on the number of victims from each of the explosion locations in Colombo. The explosion in Dematagoda took place when CCD officers investigating the hotel bombings tracked down a suspect to a house in Mahavila Patumaga, Dematagoda.

Curfew has been extended until further notice. Special hotlines have been set up for information.

5.18: Five foreign victims identified. 22 victims are believed to be foreigners based on the colour of their skin – Foreign Secretary.

5.00:  7 individuals have been arrested in connection to the explosions across the country.

4.35: All state Universities have been closed until further notice.

4.30: US President Donald Trump has commented on the SL explosions on Easter Sunday. 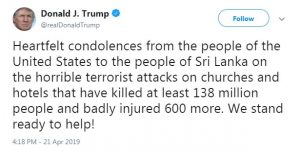 4.24: Press release from the Indian PM’s office: Indian PM Narendra Modi has reached out to President Maithripala Sirisena and PM Ranil Wickremesinghe over the Phone and had conveyed heartfelt condolences on behalf of the Indian population. While condemning the terror attack, Modi noted that these attacks were another grim reminder of the more serious challenge posed by terrorism. PM Modi had renewed his offer of all possible help and assistance to Sri Lanka

4.18: All night-mail trains have been suspended – Railways Department.

4.11: Four examinations that were scheduled to be held tomorrow by the Dept. of Education have been postponed

4.05: “I wish to express my heartfelt closeness to the Christian community [of Sri Lanka], wounded as it was gathered in prayer, and to all the victims of such cruel violence.” – Pope Francis

4.03: President of the EU Commission responds to the explosions in Sri Lanka 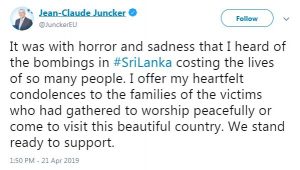 3.33: Search operations are underway at a house in close proximity to the blast-site in Dematagoda following a tip-off that there are more explosives at the location.

2.47: Curfew declared across the country from 6 pm today to 6 am tomorrow

2.42: State Minister of Defence Ruwan Wijeywardene says that they hope to declare curfew tonight.He noted that armed forces will crack down on all extremist forces in the country adding that they have no place in the country.

While assuring that security has been tightened around the country, the state minister vowed to bring those responsible before the law.

2.15: Blast reported in Dehiwala, in close proximity to the zoo, according to the Kalubowila (CSTH) Hospital Director. Two victims were admitted and subsequently passed away.
1.15: Fmr. President Mahinda Rajapaksa’s statement on the explosions that occurred around the country. 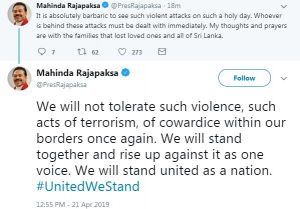 1.08: UPDATE: All easter masses in the Colombo District have been cancelled by His Eminence Malcolm Cardinal Ranjith, Archbishop of Colombo

1.00: Fmr. President of Maldives Mohamed Nasheed’s statement on the events that unfolded in Sri Lanka

12.59: UPDATE: Press release by the Department of Government Information: The Government wishes to express its deepest condolence on the deaths and damages caused by the bomb explosions reported in Colombo and several other parts of the Country. 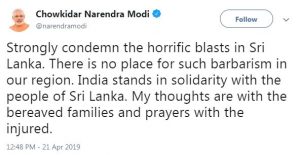 12:50: According to an eyewitness report, two blasts took place at the Table 1 restaurant in Shangri-La.

“I strongly condemn the cowardly attacks on our people today. I call upon all Sri Lankans during this tragic time to remain united and strong. Please avoid propagating unverified reports and speculation. The government is taking immediate steps to contain this situation.”

11.51am – Tomorrow and the day after declared holidays for all Government schools – Min. Akila Viraj #lka #SriLanka

10:11am – Explosion at the Kochikade Church took place at around 8.30am when when mass was being held.

10:05am – Explosion reported at the Kingsbury hotel

Explosions have been reported at the
Kochikade Church
Katuwapitiya Church
Shangri La hotel
Cinnamon Grand Hotel
A church in Batticaloa
BREAKING NEWS –  Explosion at the St Anthony’s Church in Kochikade.
Our reporter at the scene noted that over 10 people have been reported dead according to the Police.
STF and Army have been deployed at the scene
There were a large number of devotees at the church due to Easter Sunday.