The Chief Minister of the Uva Province and Parliamentarian, Sumedha G. Jayasena arrived at Vidyaloka Primary School for an event yesterday(February 18) in their high-end luxury vehicles.

The organizers of this event had taken steps to welcome the guests at a distance of a kilometre from the school grounds.

The use of school children who were inconvenienced for hours in preparation all for the sake of praising politicians who are duty bound to serve the people is not acceptable.

Exaggerating trivial incidents into massive celebrations and wasting money and time of the very same taxpayers, the ruling class personifies their real intentions which is obnoxious.

Although the academic activities of this primary school are scheduled to conclude at 1.30 p.m. the event was scheduled to begin at 2.00p.m. and students were detained at the school premises after school hours.

It is unlikely that the Chief Minister who is also the provincial minister in charge of education was unaware.

While these innocent children were lined up from 1.45 p.m to welcome the guest for the event scheduled to begin at 2.00 p.m. the guests did not attend the event until 3.30 p.m.

Consequently, the students at the school were then forced to listen to the boasting of these ‘distinguished’ guests who did not even have the courtesy to apologize for their late arrival.

Joseph Stalin, the General Secretary to the Ceylon Teachers’ Union shared his view on the matter.

He noted that following the story of the longest saree, these sort of abusive events should stop. He stressed that investigations regarding the longest saree incident came to a stop without any actions against the perpetrators. He noted that the same outcome will occur to this incident as well. He added that the President, the Minister for Education and the entire cabinet should intervene in this matter and take necessary action against it.

One could question that “Shouldn’t a circular be issued carrying the order that states laying of foundation stones and the opening of school buildings should be considered regular events and not special occasions?” 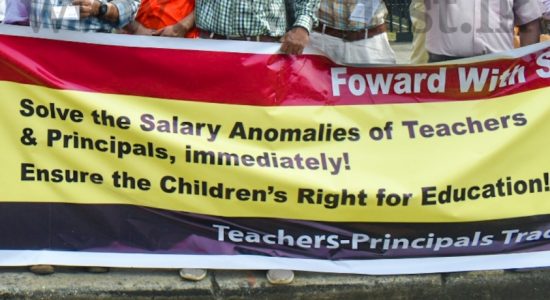