COLOMBO (News 1st) – The Sunday Times reported today (February 10) that the Government is to move amendments to recover from all parties concerned the estimated loss of Rs. 8.5 billion incurred due to the Treasury Bond scam.

The paper quoting a senior government official says the decision was made during a meeting between Prime Minister Ranil Wickremesinghe and a delegation of the Attorney General’s Department on Friday (February 08).

For this purpose, an amendment to the Registered Stock and Securities Ordinance will be moved. The Sunday Times reports that attention has been drawn to amend clause 21d (5) where the word ‘liability’ is to be replaced by ‘damages’.

To finalize the proposed amendment, a committee is to be appointed and it will comprise officials from the AG’s Department, the Central Bank, and the Treasury. One of the key recommendations of the Bond Commission which probed the alleged scam was that the losses suffered should be recovered from the relevant parties.

But in what capacity did the Prime Minister hold a meeting with the delegation of the Attorney General’s Department? As per the Auditor General’s report, the loss incurred as a result of the bond scam in the country is unquantifiable.

In such a situation, will earning back Rs. 8.5 bn as ‘damages’, suffice?

With just a few days more for the completion of four years since the first CBSL Bond Scam took place, is this yet another attempt by the Prime Minister to safeguard the rogues, rather than bringing them before the law?

Commenting on the matter Convenor of the Voice against Corruption Wasantha Samarasinghe questioned how an alleged rogue is allowed to carry out amendments to the law to earn back damages. He continued to say that the accounts belonging to Arjun Aloysius who is believed to be involved in this scam have been frozen through the CBSL.

Samarasinghe said that the frozen accounts contain Rs. 12 billion adding that this money was not robbed by him through the bond scam and instead that it came through the loans from BOC and the Peoples Bank and two private banks for the Mendis Distillery. He further said that there are Rs. 8.5 billion which have now become non-performing loans which are payable by Aloysius and the Mendis Company.

The convenor also noted that in such a backdrop that the Prime Minister is trying to deceive the people saying that the damages of the bond scam could be earned back. He added that the forensic audit that they had requested from the governor of the CBSL in November last year should take place as soon as possible.

Meanwhile, the leader of the National Freedom Front Wimal Weerawansa also commenting on the bond scam losses said that even if Pythagoras is reborn that the loss caused to the country due to this scam cannot be estimated. He further said that it is this same loss that caused the rupee to start depreciating and for the debt burden of the country to intensify. Weerawansa also added that the scam was performed by Mahendran, Aloysius and Wickremesinghe by utilizing the funds in the EPF and the ETF as well.

Politburo member of the JVP K. D. Lalkantha said that the dirty politics of the Prime Minister is a known fact even to the UNPers. He added that it was Wickremesinghe that committed the most serious crime in the history of the country through the bond scam because he gave leadership to the process. Lalkantha also stated that members of Mahinda Rajapaksa’s group are remaining silent on the matter because they are all in it together. 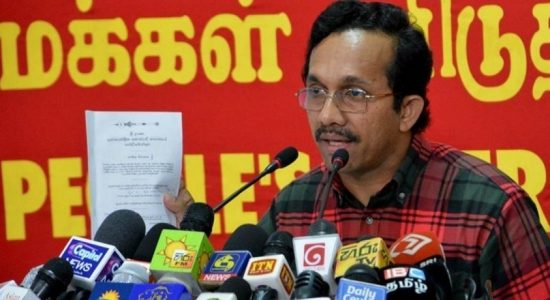