Colombo (News1st) – The Maldivian Democratic Party (MDP) will be holding its presidential primaries on the 30th of this month. However with just 7 days remaining for the crucial poll to select the presidential candidate to run against incumbent President Abdulla Yameen the MDP seems to have hit a considerable roadblock.

This roadblock began on Saturday the 19th of May when former President of the Maldives Mohammad Nasheed submitted his candidacy papers as the sole contender in the MDP’s presidential primary. Despite having launched his “Jazeera Raees” or Island President, campaign earlier this year Nasheed faces some legal obstacles in contesting the upcoming poll due to his 13-year prison sentence.

Hopes of a Presidential run for Nasheed began in February this year when the Supreme Court of the Maldives issued a ruling to quash the convictions of Nasheed and 8 other political dissidents. However soon after the ruling, the incumbent President declared a state of emergency and arrested Chief Justice Abdulla Saeed and another judge of the supreme court. The earlier verdict was then changed.

Former President Nasheed maintains that the second ruling is illegitimate and reiterated his sentiments with News1st last week.

The Elections Commission (EC) of the Maldives has threatened to dissolve the MDP if the party goes ahead with its presidential primary with former President Nasheed as a candidate.

The EC had made their intentions clear through a letter sent to the MDP. Under the “Political party act” of the Maldives, the EC has the power to impose fines on any party or seek a High Court ruling to disband the party.

The Joint Opposition of the Maldives has called the EC “hopelessly politicised” and also described it as the mouthpiece of the current President. 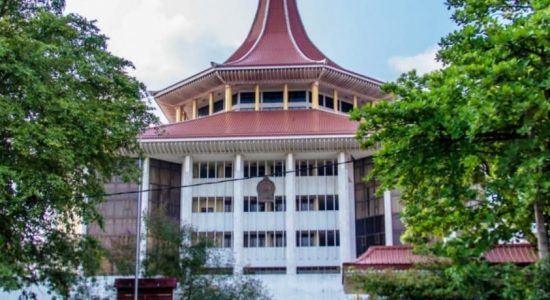 Wijeyadasa goes to court against the Hambantota Port lease