I can sense that there is an election drawing closer: Mahinda Deshapriya

I can sense that there is an election drawing closer: Mahinda Deshapriya

The Appeals Committee on the demarcation of boundaries of local government institutions says that the report on the matter comprises of a plethora of issues.

Minister of Provincial Councils and Local Government Faiszer Musthapha notes that once these issues are solved, the local government elections will be held.

The Appeals Committee on the demarcation of boundaries of local government institutions is chaired Asoka Peiris. The committee has received over 2000 appeals at present, and have concluded operations pertaining to six districts.

Appeals Committee on Demarcation of Boundaries Chairman Asoka Peiris, noted that the population density and the community ratios must be considered and it must be ensured that a representation is made based on that ratio.

“When you look closer, the demarcation of 4860 areas have not been based on those matters”, said the chairman, who explained that this the primary issue and there is no desire to make this beneficial to one single political party, and what is needed is to create the demarcation in a manner that will ensure the people will is represented.

He pointed out that three things need to be looked at when creating the new borough or division and maps need to be drawn. He said that it will take three weeks to compile all and hand over a report to the subject minister

“I have been asked to find a national solution to this issue”, said the Minister of Provincial Councils and Local Government, Faiszer Musthapha. He further stated that there are around 2000 appeals and the period of the election is being requested and in three months, six districts have been reached and the task need to be completed for another 19 districts.

Chairman of the National Elections Commission, Mahinda Deshapriya,  speaking to reporters commented on the preparations for the local government polls. He noted that the power of holding the local government elections in a month, two months, or even a year does not lie with anyone.

He explained that for the demarcation a five-member committee headed by Jayalath Ravi Dissanayake was appointed. And the Committee handed over the report on June 19, 2015. During this time period some of the Former Heads of the local government institutions had gone to the Supreme Court.

“I can sense that there is an election drawing closer”, he said, noting that based on the court verdict and the Committee of Asoka Peiris, it can be said that the Elections Commission in no way would hold an election on the “need of anyone.”

He went on to explain that the reasons for predicting that elections are close at hand is that articles are published on social media platforms such as Facebook criticising the elections commissioner, when there is an election that is drawing closer

The cost for the elections was also discussed.

“For an election, we usually ask for three billion rupees”, he explained and went on to state that for this election the requirement is more because of the voting centres, and that cost would be around Rs.3.5 billion. 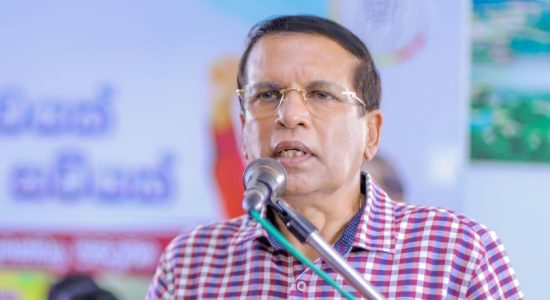