The Joint Opposition convened a media briefing this morning where UPFA MP,Mahindananda Aluthgamage stated that although the people voted based on the faith they had on President Maithripala Sirisena, what is taking place in the country is the program of the United National Party.

He further added that for the first time, under the UNP Government of Ranil Wickremesinghe a situation has arisen where the rupee falls off the people’s pockets.

“We have reached a decision on the constitutional reforms” he said and went on to note that anything that harms the country will not be allowed to take place.

He further noted that when it comes to constitutional reforms, the SLFP will be have one stance

MP,Shehan Semasinghe stated that the price of paddy is 18 rupees and if the price is 18 rupees, the farmers will hope to sell if for 10 rupees and the Government hopes to purchase the paddy by the end of March.

“When paddy is purchased for 28 rupees by end of march, who earns an income” questioned MP,Semasinghe who went on to explain that farmers have no storage facilities and the Government has not slashed the debt of the farmers and has pawned the local agriculture to other nations

‘I can sleep in peace when Ranil Wickremesinghe is in jail,’ – Mahindananda 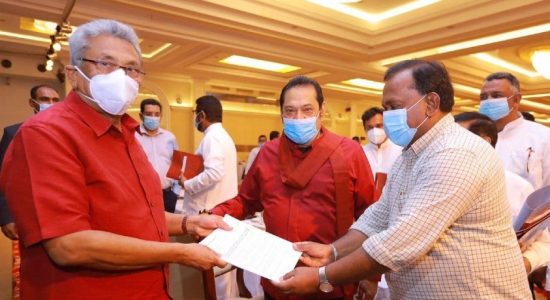