The government has decided to conduct a survey in order to ascertain as to whether persons who were evicted from their houses in Kajima-watte, Thotalanga should be given new houses. The persons who face this issue said that this decision was made during a meeting with Minister Patali Champika Ranawaka this afternoon.
The survey comes after Urban Development Authority took measures to demolish several houses in Kajima Watte, Thotalanga.

At around 9 a.m. on Wednesday morning, the Colombo – Negombo road was reopened for traffic following the intervention of SSP Ajith Rohana who is in charge of the Colombo North area.

Contrasting the police action in dealing with the protesters with previous incidents in the recent past, the SSP said ” If we had followed a different course of action, a far more unfortunate incident would have taken place, one that is worse than the traffic congestion.”

Minister of Megapolis and Western Development, Patali Champika Ranwaka, convened a media briefing today to make clarifications on the matter. He made clear that the homeowners were given alternative homes, and made the distinction that those protesting the demolitions were living in the houses on rent.

“All these persons are not persons without houses.And I state it with responsibility. Such ruffian acts will not achieve anything,” he said.

Demonstrators anticipating the results of the discussions once again obstructed the Colombo – Negombo road by coming on to the Sri Lanka – Japan Friendship Bridge at around 02  on Wednesdays afternoon.

However, following the arrival of the persons who engaged in the discussions, the demonstrators moved away. 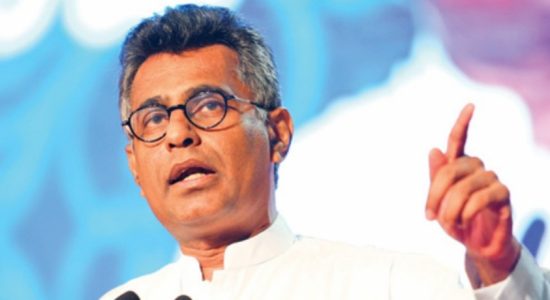 No structure for democratic decision making in Cabinet: Patali