Robots want to move into your home

Robots want to move into your home

The modern family is getting a new member.

More than a dozen firms are promoting new kinds of home robots at this year’s Consumer Electronics Show (CES) in Las Vegas.

None are the human-like automatons of science-fiction. But they do point the way towards how domestic bots might evolve beyond the robo-vacuum.

South Korea’s Furo-i Home is one of the more advanced examples.

It’s a sleek-looking sensor-laden cone on wheels topped by a tablet that displays a friendly-looking animated droid’s face.

You can verbally instruct it to take control of internet-controlled smart devices – telling it to turn lights, music and heating on or off – use it as a teaching aid for your children, or take advantage of its health check software to help care for elderly relations.

“The robot has many sensors, facial recognition and can detect the temperature,” explains Se-Kyong Song, chief executive of its maker Futurebot.

You can set it to wake up an elderly parent, remind them to take their medicine, eat breakfast and follow the rest of a schedule.

“And if something unexpected happens, it can send a message to the family saying there might be a problem and then let them talk to their parent via video chat to ask if they are OK.” 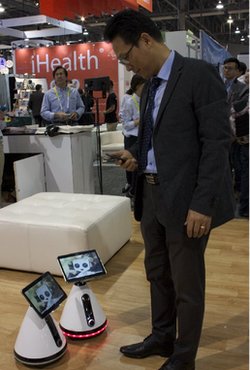 Those looking for a cheaper alternative might be interested in Ukrainian start-up Branto, which has just announced a crowdfunding campaign for a robotic sphere priced at $399.

Although it lacks a screen of its own, it promises broadly similar functions, including the ability to send you a notification if its motion sensor is triggered when your house is supposed to be empty.

There is one important caveat – at present the prototype’s battery only lasts for about three hours before it stops providing most functions.

“We are trying to make it longer, but the device is very small and we want to keep it looking nice,” says Alexandra Barsukova, the start-up’s business development director.

Most of the other robots at CES are focused on doing a more limited set of tasks – and that may be a wise strategy suggests Casey Nobile from the Robotics Trends news site.

“It’s very hard to make a robot do everything, like in the Jetsons analogy that everyone likes to refer to,” she explains.

“You’re going to see advances in robots controlling other smart home tech via software before you see something like a machine with an arm that makes you coffee and delivers it to your bedroom, just because of the limitations with manipulation technology and the issues with battery life.”

Droplet is one example of a more specialist robot.

The machine is an internet-connected sprinkler that can be set to propel different amounts of water to different plants in its surrounding area.

“We can accurately target two plants less than 6in [15cm] away from each other and give them very different amounts of water,” explains Steve Fernholz, the firm’s founder.

“And we take into account weather data, so if there’s an 80% chance of a thunderstorm tonight it’ll delay and wait to see if the rain actually falls.”

He believes most people will be more comfortable with such a device at this stage rather than an automaton wandering through their home.

“It’s not about when the technology is ready, it’s when consumers feel comfortable enough about having a robot in their home. It’s a very personal space.

“That’s why even with Droplet we tried to make it look inviting – not something you would feel apprehensive going up to or might give you anxiety.”