Residents of some parts of Colombo and surrounding areas continue to complain that although maintenance work on pipelines has been completed, the water supply to their areas is yet to be restored.

The National Water Supply and Drainage Board says that the water supply will be restored in full to all areas by midnight on Tuesday, August 5.  A scheduled water cut was imposed on Saturday in several parts of Colombo, as a result of reconstruction work near the New Polduwa bridge in Battaramulla on the Ambathale Colombo water main.

Although the scheduled thirty six hour water cut was to end at 9 p.m. on Saturday, the water supply was not restored.

Water supply to Maharagama, Boralesgamuwa, the Kesbewa Municipality, Colombo 5, main and by roads from the Railway Station junction to Kirulapona on High  Level Road and rom Krirulapona to Borella on Baseline Road and all by roads, was also disrupted.

The water cut was also imposed on Kynsey Road, Cotta Road and Castle Street. Residents of those areas were severely inconvenienced by the unannounced extension of the water cut.

This footage was captured from areas including Nawala, Nugegoda and Kotte, on Tuesday morning. Although some area received water this morning, it was unusable.

The Mayor of Kotte, Janaka Ranawaka said he too had been severely inconvenienced by the ad-hoc actions of the Water Board.

Mayor of Kotte, Janaka Ranawaka commented on this situation:

“People from Nugegoda and Pita Kotte were constantly complaining regarding the water shortage. The Water Board said there were insufficient bowsers to provide water for everyone. I asked them why they did not hold discussions with us prior to commencing work if they were going to require bowsers. There was no co-ordination on their part whatsoever. That is why the problem has arisen.”

“Some people contacted me and informed me of important occasions like weddings, and then through the council, I beg your pardon, I personally gave them water tanks to allow them to collect water. I did not have the time to commence mass distribution of water as if there were a drought. Work has been completed now.”

General Manager of National Water Supply and Drainage Board, Ranjith Balasuriya also commented on the situation:

“It took us longer than we expected. We completed work by 4 a.m. today and begun pumping water as usual. A problem persists in providing water to higher ground. I think a lot of people collected water in advance since it was to be cut off for about two days. “

He added: “We believe that the water supply will be restored completely tonight. We have also given numbers on which people can contact us if there are persisting problems with their water supply. We will supply water to these areas using bowsers.” 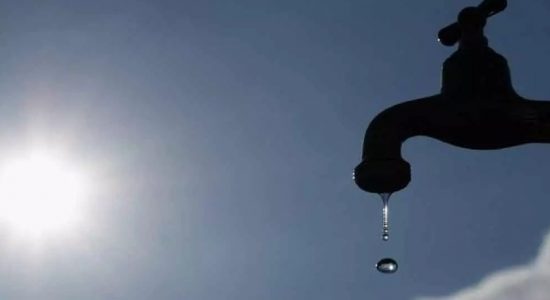