The grand finale of Super Fighter concluded amid much fanfare and ceremony on Sunday evening, having introduced onto the national stage, a group of talented boxers, who will doubtless go on to do their country proud, overcoming all obstacles.

Bhanuka Jayampathi of the Vidyarathana Faculty in Horana, won the coveted Super Fighter title of Best Boxer in the competition.

Isanka Sanjaya of Vidyartha College, Kandy won the title of Most Popular Boxer at Super Fighter.

Super Fighter, Sri Lanka’s first sports reality TV programme, is a joint initiative of MTV and MBC, News 1st, M.A.S Holdings, and the Sri Lanka Amateur Boxing Association whose primary purpose was to bring the nation closer to realising the dream of Olympic Gold at the 2020 Olympic Games.

Meanwhile, several views were expressed at the event on Sunday.

“We know that many of these boxers who hail from very rural areas, are capable of winning a gold medal on the world stage. As a company and as Sri Lankans, we wish to take them on the long journey with our fullest support and to bring victory to Sri Lanka some day.”

“Everyone in this country is aware of the close relationship between sport and The Capital Maharaja Organisation. Following its establishment in the 1950s through to the 60s, the group was instrumental in promoting sports like Netball and Basketball; and then in the 70s and especially in the 80s cricketers of the caliber of Michael Tissera, Neil Shanmugam, Duleep Mendis, Sidath Wettimuny and Asantha de Mel in the 80s, were employed by the Capital Maharaja Organisation. “

He added: “It is now evident that the support and strength given to these cricketers in the 70s and 80s has now made cricket a professional sport in the country with our cricketers progressing immensely. I believe that it is that same support and strength that we have been able to give boxing today. Through their profiles we have seen the rural environment from which these boxers hail from. Why can’t boxers like them go on to win medals on the world stage and become the next Floyd Mayweather or Manny Pacquiao. Why can’t one of our youth become a talented and world renowned athlete? This is the promise that the Capital Maharaja Organisation gives to all of Sri Lanka.”

The most colourful moment of the grand finale of  Super Fighter, which featured numerous dance and song performances, was no doubt the announcement of the winners. 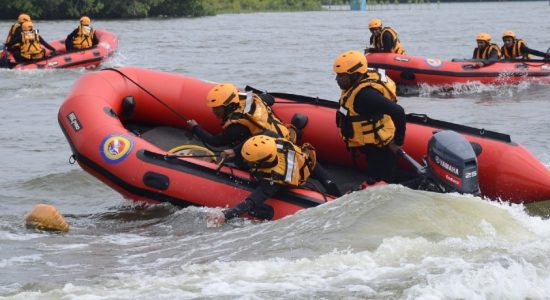