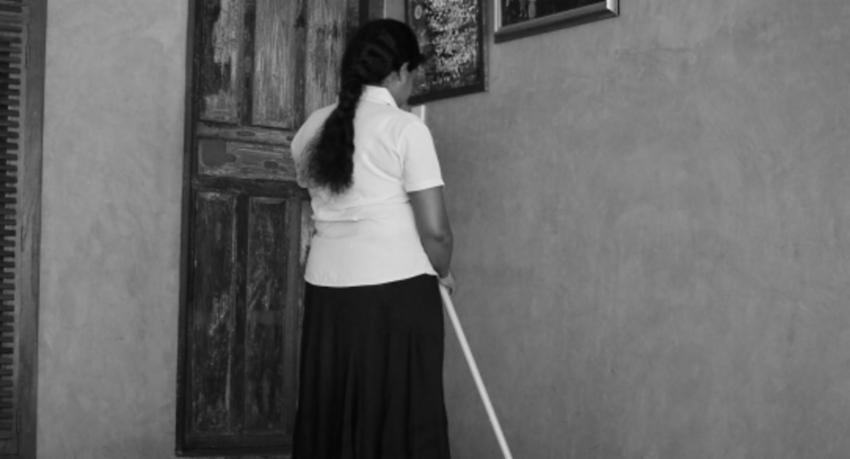 COLOMBO (News 1st) – International slavery continues to be a modern day curse that plagues our world.

News 1st has for many years battled against international slavery, with a particular focus on Sri Lankan Domestic Workers who are all too often held captive in the Middle East.

In the recent past, News 1st has warned that Sri Lanka's current economic crisis would result in increasing numbers of Sri Lankan women being trapped into slavery as thousands more venture overseas to escape poverty.
Now our worst fears have been realised.

News 1st brings to you the shocking revelation that more than 50 women have been sent into slavery in Dubai by two job agencies in the central cities of Anuradhapura and Kurunegala, in a report filed by News 1st's Nisal Sooriyarachchi, and Naveksha Gunasekera.

A foreign employment agency in Anuradhapura has trafficked more than 50 women to work as virtual slave labour in the state of Dubai where most of them are currently been held against their will in atrocious conditions.

Several women who who fell victim to this scam have revealed that the agency headed by 3 women living in Dubai.

Thushara Nilmini, a resident of Anuradhapura, who finally made her way back to Sri Lanka after falling victim to the scam, said that between 50 and 60 women who went abroad for domestic work are being held captive in various areas of Dubai.

Chandrika, who asked that her full name not be revealed, has gone to work as a domestic worker in Dubai and is currently in a destitute state there. News 1st managed to obtain a telephone interview while she is in Dubai.

She said that they stayed at the agency for about a month, and barely got anything to eat.

"Then they stationed us at this safe house. It has been 2 and a half months since then. They barely even feed us here.  I am really suffering here. There are about 50 women here at the agency with us. Some of them are here for 3,4 months as well. They haven't even paid us our salaries  They don't even feed us. I have to smuggle food into the washroom just to feed myself. Please do something and bring me back to Sri Lanka," she pleaded.

The family members of these victims say that authorities in Dubai have been informed about this and they request the Government of Sri Lanka to immediately intervene to rescue these victims and bring them safely  home to Sri Lanka.

A relative of a Sri Lankan expatriate worker said that his wife moved to Dubai seeking employment, and remained at the Agency for a month, and subsequently, moved her to a house.

"They have been harassing her since the time she went to work at that house. They don't allow her to communicate with us. She's only allowed to call us once a month. They barely feed her as well. My wife went abroad because we're so poor. I'm sick. I've undergone many operations. All I'm asking for is her safe return. I have complained to the Foreign Employment Bureau," he said.

Another Sri Lankan expatriate said that sh went to Dubai on the 30th of June through a broker at an agency in Kurunegala.

"When we went there, there were about 50 to 60 women being held hostage. I stayed at the agency in Dubai for a month. They sent me to a house on the 22nd of July. The woman there was mentally ill. I requested a change in workplace in 2 weeks. But they didn't do that. After a month, we had no option, so my husband mortgaged our house and went and gave that money to the agency. They even took my salary away. Then they got me to give them a voice recording saying I wasn't abused. We had to pay 500,000 rupees for me to return back to Sri Lanka," she said.