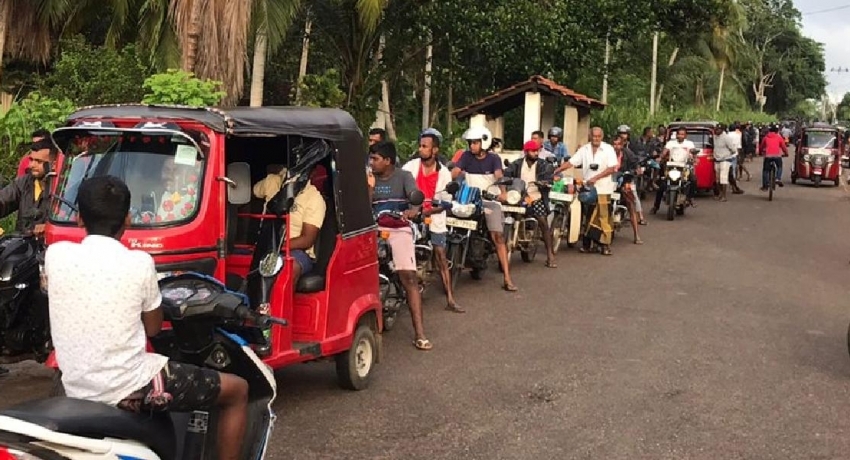 COLOMBO (News 1st); As fuel prices were hiked again today morning (26), people had to stay in queues longer, as many filling stations did not receive fuel for days.

People still remain on roads, in hopes of refueling their vehicles while the Minister said that the day which the next gas shipment would arrive cannot be stated.

Speaking to News 1st, people continued to say that they have been staying in the fuel queue for days, and even after going back home they are unable to live comfortably due to the essential goods shortage at their homes.

An tense situation arose between two groups at the Godakawela petrol station in Ratnapura yesterday (25), which escalated into a dispute. Later, Police had to intervene to stop the group from assaulting each other.

Meanwhile, a heated situation arose at the Uhana petrol station last night due to people accusing that the fuel was not being provided despite the filling station possessing the necessary stocks.

Later, the police and the Uhana Divisional Secretary intervened, and when they checked the filling station, it was revealed that there was no fuel.

A man who had come to obtain fuel from the Kantale petrol station yesterday had skipped the queue, which led to an intervention by the Army and Police to curb the situation.

The diesel which arrived at the Wavinna petrol station in Ampara last night, began distributing this morning, at the raised price.

However, people in the queues protested against the increase in fuel prices, and the filling station eventually had to provide at the previous price.

The youth community in the area organized a dansal to the people who had been queuing for days at the Hambantota filling station yesterday.