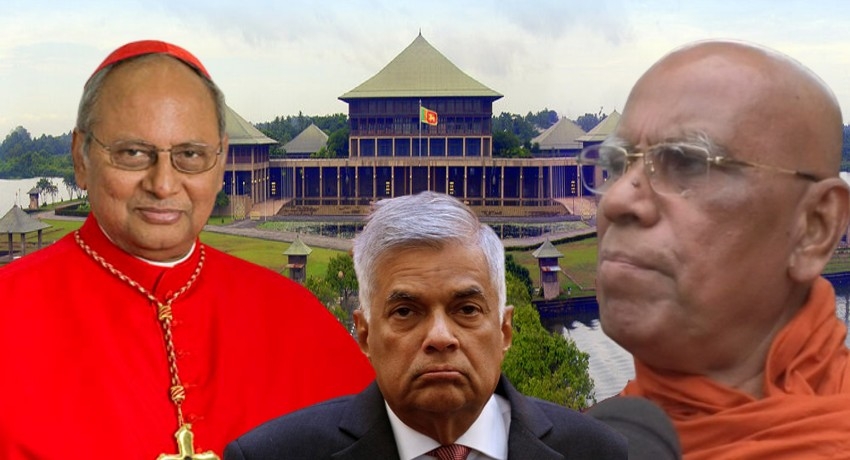 COLOMBO (News 1st); Two of the most respected members of the clergy Venerable (Dr) Omalpe Sobitha Thero, Chief Sanghanayake (Dakshina Lankawa) of the Ramana Sect/Nikaya, and Archbishop of Colombo Malcolm Cardinal Ranjith have unconditionally opposed the appointment of Ranil Wickremesinghe as the nation’s Prime Minister.

Venerable (Dr) Omalpe Sobitha Thero speaking to reporters in Colombo said that the appointment of Wickremesinghe to the vacant post of Prime Minister is ‘against due process, unconstitutional, and unethical.’

The Venerable Thero said that Wickremesinghe is not suitable to be appointed to the post of Prime Minister.

“The people are asking for one thing, but are being offered something completely different,” said the Venerable Thero, adding the Mahanayake Thero’s have made a clear directive with respect to the appointment of a new administration.

He said the appointment of Wickremesinghe would be seen as a direct disregard of the directive.

“The entire country is aware that Ranil Wickremesinghe is not a leader who has won the hearts of the people,” the Venerable Thero added.

He is a National List MP and is not a leader who can realize the aspirations of the people, said the Venerable Thero, adding that Wickremesinghe is being appointed for some other personal reason, and not because the people want him as the PM.

‘This is a decision being made for the sole protection of the Rajapaksa’s,’ said the Venerable Thero.

He noted that one person is being given power by breaking away MPs from other parties, sometimes forcibly or by offering them money.

Ranil Wickremesinghe’s appointment to the post of Prime Minister cannot be accepted, said His Eminence Malcolm Cardinal Ranjith on Thursday (12).

Speaking to reporters in Colombo the Archbishop of Colombo expressed the dissatisfaction over the decision reportedly made by President Gotabaya Rajapaksa to appoint Ranil Wickremesinghe as the Prime Minister of a new Cabinet.

“Mr. Wickremesinghe is only one representative of Parliament and he does not command the majority in Parliament. This appointment is not legal and this is not the solution that the people in this country want at the moment,” he said.

He also said the people want a person who can win the confidence of all the people.

“The Mahanayake Thero’s suggest a non-partisan person. What has happened to that suggestion is everybody’s guess. We would like to reiterate that is it necessary for us to move forward from the present crisis with confidence into the future, we need a complete change of this system. And that can happen not through the leaders of the present parliament parties,” he said.

His Eminence Malcolm Cardinal Ranjith went on to note that it can only happen with someone who is not a partisan person, who can win the confidence of all the citizens of this country.

His Eminence Malcolm Cardinal Ranjith said the swearing-in ceremony of Ranil Wickremesinghe should be cancelled.