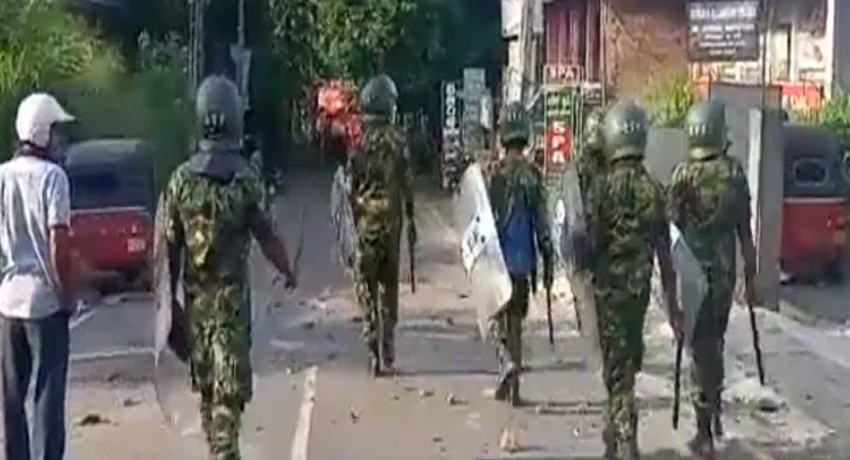 COLOMBO (News 1st); Former SSP for Kegalle K. B. Keerthiratne was ordered to be remanded until the 6th of May 2022, by Colombo Additional Magistrate Shalini Perera on Friday (29).

SSP Keerthiratne was arrested by the Criminal Investigations Department on Thursday (28) evening, and he was ordered to be remanded after the Additional Magistrate inspected his condition at the Police Hospital in Narahenpita, where he was receiving treatment.

The Senior Police Officer was receiving treatment at the Police Hospital under police guard and was handed over to the Prisons Department after he was ordered to be remanded.

On Friday (29) morning the Criminal Investigations Department informed the Kegalle Magistrate’s Court that SSP Keerthiratne and three police constables were arrested over the incident of opening fire at protestors in Rambukkana.

The CID told Kegalle Magistrate Wasana Nawaratne that SSP K. B. Keerthiratne who gave the order to shoot at a public gathering was arrested at the Police Hospital in Narahenpita, and was under police protection.

The CID also said that the three police constables who were arrested for acting on the order to shoot were arrested at the Kundasale Police Hospital, and were under police protection.

The Kegalle Magistrate had informed the Colombo Magistrate’s Court to obtain a report from a Judicial Medical Officer on the condition of SSP Keerthiratne who is receiving treatment at the Narahenpita Police Hospital.

Kegalle Magistrate Wasana Nawaratne also informed the Theldeniya Court to obtain medical reports from the Kandy Hospital JMO on the conditions of the three police constables receiving treatment at the Kundasale Police Hospital.

The Magistrate also informed the CID to submit a government analysts report on the clothing worn by the police officers who were involved in the shooting, as per the request of the aggrieved party.

Recently, a Police Constable testified in court that ASP Dharmaratne ordered him to fire into the sky.

The aggrieved party had requested the court arrest the two officers based on the witness testimony.

Considering these submissions, the Magistrate ordered the CID to produce those two officers at the next hearing, and the case was postponed to the 2nd of May.