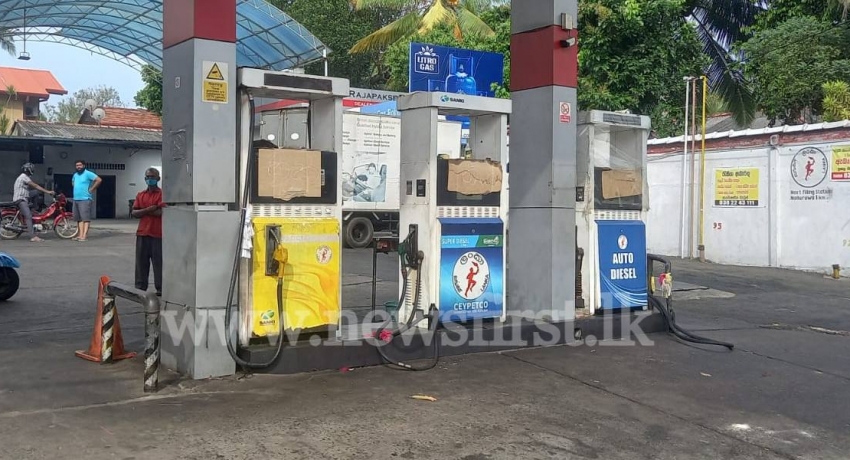 COLOMBO (News 1st); The diesel shortage in Sri Lanka has taken a serious toll on the country’s transport, agriculture, fisheries, tourism, and other sectors.

Across many areas, people were seen waiting in line since Tuesday (1) night to obtain fuel for their vehicles and machinery.

In Kelaniya, people alleged that filling stations were only pumping fuel for those in high positions, and the common man is refused fuel despite waiting in line.

Similar scenes were witnessed across many filling stations in the country, while in some cases the local police were called in to maintain order in the distribution of fuel.

IGP C.D Wickramaratne has ordered all Senior Police Officers to ensure that law and order, and peace are maintained at filling stations, given the present crisis situation.

In some places, people took to the streets to protest against the failure to ensure a smooth supply of fuel, after filling stations claimed that they had run out of fuel.

These protests were taking place at a time when two more ships carrying Diesel are scheduled to arrive in the country on Wednesday (2) and Thursday (3).

Secretary of the Ministry of Energy K.D.R Olga said that one of the ships will reach Colombo with 33,000 MT of Auto Diesel and 7000 MT of Super Diesel.

She said that steps are being taken to open letters of credit for the relevant ships.

Secretary to the Ministry of Energy K.D.R Olga stated that two more ships carrying furnace oil are scheduled to arrive on the 6th and 7th, March 2022.

Meanwhile, the Ministry of Energy stated that NO ship carrying fuel to Sri Lanka has been rejected.

Secretary to the Ministry K.D.R Olga said that samples of all fuel shipments imported into the country so far have passed all the relevant tests.

The Secretary to the Ministry further stated that the Petroleum Corporation also confirmed that no sample has failed any test.