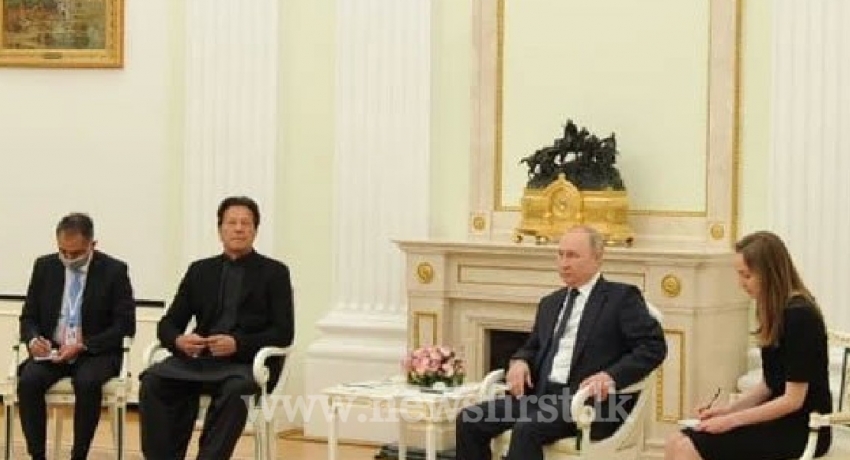 MOSCOW: Pakistan Prime Minister Imran Khan on Thursday (24) regretting the latest situation between Russia and Ukraine underlined Pakistan’s belief that disputes should be resolved through dialogue and diplomacy.​

Imran Khan, who had a Summit meeting with President Vladimir V. Putin in the Kremlin, said Pakistan had hoped diplomacy could avert a military conflict.

“The Prime Minister regretted the latest situation between Russia and Ukraine and said that Pakistan had hoped diplomacy could avert a military conflict”, a statement issued by the PM Media Office said.​

“The Prime Minister stressed that conflict was not in anyone’s interest, and that the developing countries were always hit the hardest economically in case of conflict. He underlined Pakistan’s belief that disputes should be resolved through dialogue and diplomacy,” the statement added.

The two leaders held wide-ranging consultations on bilateral relations as well as regional and international issues of mutual interest.

​Recalling the telephone conversations during the recent months between the two leaders, the Prime Minister expressed confidence that the positive trajectory of bilateral relations will continue to move forward in the future.

He added that the trust and cordiality marking the relationship would translate into further deepening and broadening of mutual cooperation in diverse fields.

The Prime Minister reaffirmed the importance of Pakistan-Stream Gas Pipeline as a flagship economic project between Pakistan and Russia and also discussed cooperation on prospective energy-related projects.

He underscored Pakistan’s commitment to forge a long-term, multidimensional relationship with Russia.

​In the regional context, the Prime Minister underlined the urgency of addressing the humanitarian crisis and preventing potential economic meltdown in Afghanistan.

He reiterated that Pakistan would continue to work with the international community for a stable, peaceful and connected Afghanistan.

In this regard, the Prime Minister underscored the ongoing cooperation and coordination between Pakistan and Russia at various international and regional fora, including the Shanghai Cooperation Organization (SCO).

​On the situation in South Asia, he highlighted the serious human rights situation in IIOJK and underscored the imperative of peaceful resolution of the Jammu and Kashmir dispute.

The Prime Minister also highlighted the developments detrimental to regional peace and stability and stressed the need for measures that would help keep the regional balance.

​Expressing concerns on rising trends of extremism and Islamophobia in the world, he emphasized the need for interfaith harmony and coexistence.

Appreciating President Putin’s understanding of the respect and sensitivities that the Muslims attach to the Holy Prophet (PBUH), the Prime Minister said that inter-faith harmony and respect for all religions was imperative for peace and harmony within and among the societies.

​The Prime Minister along with high-level delegation is on a two-day visit to the Russian Federation from 23-24 February 2022. He is accompanied by cabinet members and senior officials.