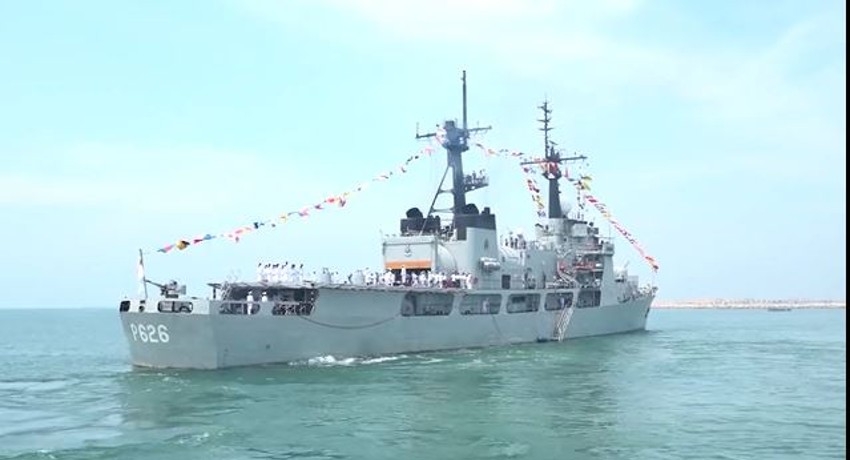 COLOMBO (News 1st); The SLNS ‘Gajabhahu’ ship joined the traditional Gun Salute to the nation conducted by the Sri Lanka Navy at 12.00 noon in the seas off Galle Face on Friday (4).

Navy Spokesperson Captain Indika De Silva told reporters that SLNS Gajabhahu is the largest vessel with the Sri Lanka Navy and for the gun-salute was accorded using the 47 MM Saluting Gun (4 nos).

On the sidelines of the 74th National Independence Day celebrations held under the theme “An affluent tomorrow and prosperous motherland with challenges overcome” Sri Lanka Navy honoured the nation by according a 25-Gun Salute onboard Sri Lanka Naval Ship (SLNS) Gajabahu by 12.00 noon today (04th February 2022). The ceremonial tradition was executed under the guidance of the Commanding Officer of the ship, Captain Malan Perera.

According of a Gun Salute could be held on National Independence Day or a particular day designated by the government as a mark of respect to the nation and the highest honour of 25-gun salute is only accorded to the nation. Going by this time-honoured custom, Sri Lanka Navy today executed this military honour from SLNS Gajabahu to coincide with the 74th Independence Day celebrations and this rare occasion was televised/broadcast live through electronic media.

As long as the number of Gun Salute is concerned, a Captain and below rank in command of a ship could be accorded a 07 as a return salute. Ranging from the minimum number; a 09 Gun Salute for Consul, 11 for Commodore or equivalent and Consul General, 13 for Rear Admiral or equivalent and charged affairs or subordinate diplomatic agent left in charge of a mission, 15 for Vice Admiral or equivalent, 17 for Admiral or equivalent, Envoys Extraordinary and Ministers Plenipotentiary, Governor, High Commissioner, Governor General and Secretary of Defence,  19 for Prime Minister, Minister of Defence, Admiral of the Fleet and equivalent, 21 for President of Democratic Socialist Republic of Sri Lanka and other President of a Republic or Heads of a States, foreign sovereign and entitled members of Royal family is accorded as deemed necessary.

This naval tradition dates back to the 14th century. In 1948, the Navy had fired a 15- Gun Salute at the Galle Face Green on the first Independence Day. The Gun Salute honour accorded to the nation onboard SLNS Gajabahu today, recorded in the history of Sri Lanka Navy as the tradition executed onboard platform for the second time after 72 years, subsequent to such naval honour presented way back in 1950 onboard HMCyS ‘Vijaya’.