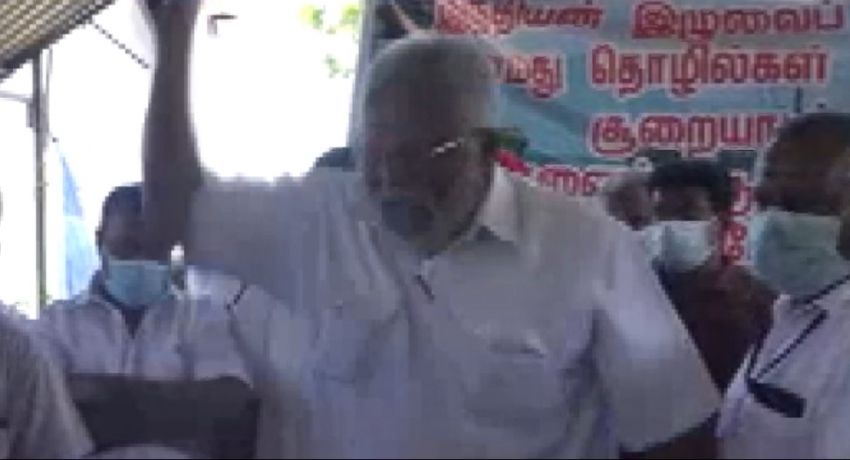 COLOMBO (News 1st); A tense situation arose when Fisheries Minister Douglas Devananda expressed his anger during a protest by fishermen opposite the Jaffna District Secretariat on Thursday (03).

Fishermen staged a protest opposing the illegal entry of Indian fishermen into the Sea of Sri Lanka.

The protesters staged the demonstration by blocking the roads leading to the District Secretariat and the Northern Governor’s Office.

Fisheries minister Douglas Devananda visited the site of the protest and pointed out that the lives of Indian fishermen also matter in the Indo-Sri Lanka Northern waters crisis.

When the fishermen who were engaged in protests demanded that the Minister give them a document containing written assurance of their security, the Minister said that they are taking diplomatic steps to curb the crisis.

Speaking further, he stated that if Indian fishermen enter Sri Lankan waters illegally, Sri Lankan authorities will seize their boats and hand them over to the local fishermen. Moreover, the Minister also said that he will submit a proposal to the cabinet on Monday to provide relief to those affected due to Indian fishermen.

The fishermen, while engaging in the protest said that they do not need compensation, as the funds will not help them reclaim the lost lives or to prevent India’s influence, however for the Government to take steps to provide them security, as to earn on their own and provide funds to the Government.

The fishermen then said that if the Government cannot provide them with security, to give them the responsibility to do the needful.

The Minister, responding to this said “Do what you want”.

Subsequently, he left the area following a question of a fisherman asking him why the Minister is remaining in power if he cannot provide security to the fishermen.